In January 2015, Greece is holding one of the most crucial votes in its modern history. The national election of 25 January will decide which party will lead the next government. It will also determine whether Greece will attempt a harder stance towards the ECB-IMF-European Commission troika, and ways to handle its unsustainable debt that do not involve the pauperisation of growing parts of the Greek society.
More importantly, this election will show whether the Greek people are ready to move towards a new era, away from the two parties that have dominated the country’s political life for the past 40 years, and are mainly responsible for the country’s crisis today.
Since the beginning of the “metapolitefsi”, or the end of the dictatorship, which lasted from 1967-1974, Greece has seen 14 national elections (see table).
These elections have been dominated by two mainstream parties: the centre-right New Democracy and the centre-left/socialist PASOK (Panhellenic Socialist Μovement).
While New Democracy won the 1974 and 1977 elections under the leadership of Konstantinos Karamanlis, Andreas Papandreou’s Panhellenic Socialist Movement won by a landslide in 1981 and remained in power in 1985. Then came a short period of New Democracy rule, from 1989-1993, before PASOK’s return to power for another 11 years, after winning 3 consecutive elections in 1993, 1996 and 2000. New Democracy came to power in 2004 and again in 2007, ruling for 7 years and was voted out of office in 2009.

From 2009 onwards, the country has seen a 2-year government by George Papandreou (son of Andreas Papandreou, who founded PASOK in the 1970s) and a coalition government formed in 2011 by PASOK, New Democracy and LAOS headed by technocrat and former ECB Banker Lucas Papademos. It was under George Papandreou’s government in 2010, that the country entered a loan agreement with the ECB-IMF-European Commission troika and paved the way for the austerity policies that have depressed the economy.

The latest elections took place in two rounds in the spring 2012. The May 2012 election did not allow any party to rule by itself. As no single party secured the majority of parliament seats, the three largest parties (New Democracy, SYRIZA and PASOK) were in turn given the mandate to form a coalition government but with no success. The repeat elections took place in June 2012 leading to a coalition government between New Democracy, PASOK and DIMAR. Furthermore, the 2012 election saw the rise and entry to parliament of the neo-nazi, fascist Golden Dawn party, whose members were engaged in criminal activities against immigrants and left-wing and anarchist activists.

In order to understand the context of the 2015 election, a few more notes are necessary. SYRIZA (Coalition of the Radical Left), the main party currently in opposition and most probable winner of the next elections, is formed of small left-wing parties, around the former SYN (Coalition). LAOS stands for Popular Orthodox Party. It is a nationalistic, populist party of the extreme-right which was created in 2000 and mainly attracted voters on the right of New Democracy. It entered parliament for the first time in 2007 and gained 5.8% in the 2009 election. It participated in the PASOK-New Democracy coalition government in 2011, under the leadership of Loukas Papademos and lost most of its appeal to the voters of the extreme-right. Its collapse left a vacuum, which facilitated the rise of the fascist Golden Dawn. LAOS’s leader Giorgos Karatzaferis was recently accused of moving illicit funds of up to €1,65million to his off shore companies. Political Spring which won 4.9% in the 1993 election, was a short-lived party created by current Prime Minister Antonis Samaras.

Threshold of 3% and bonus: Since 1990, there exists a threshold of 3% of the total vote for a party to enter parliament leading to fewer parties in parliament. Since the 2012 elections, the party with the highest vote gets an extra 50 seats in the 300- seat parliament.

The January election is taking place in a very tense and highly polarised political environment, in a society, which has suffered severely from austerity policies and the decisions of corrupt domestic political elites. In the past 5 years, the Greek economy has been violently transformed: Unemployment has risen to 28% with youth unemployment at 59%, the economy has been shrinking and the country’s young and bright and migrating abroad. In the past 2 years, Golden Dawn murdered left-wing activist Pavlos Fyssas, which led to the arrest of a large number of its MPs, including their leader. Is the Greek society ready to move into a new era, away from the corrupt political forces that are largely responsible for the pauperization of large parts of the society and rise of fascist forces? It remains to be seen.

Political scientist and founder of the public opinion survey company VPRC Christoforos Vernardakis has provided a fascinating breakdown of the results of the European elections, showing which social groups favored which political parties.

The ‘electoral reckoning’ of the past two years resulted in the following general outcomes: a.) the electoral victory of a party of the radical left (SYRIZA), a fact of historic significance both for the Greek party system and at the European level, and indeed with a share of the vote almost equal to that obtained in the parliamentary elections, b.) the significant reduction in electoral support of the parties of the coalition government (New Democracy – PASOK/Elia) which fell by a combined 11.5%, a precipitous fall in the two years between elections, c.) the collapse in the support of the third coalition partner of 2012, DIMAR (Democratic Left) a fact which had been established at least a year earlier, d.) the confirmation of the electoral rise of Golden Dawn which is now a basic player in the party system and e.) the relatively disappointing results for parties such as the Independent Greeks, KKE (the Greek Communist Party) and the newly formed ‘center left’ To Potami (The River).

One table from the analysis of exit polls showing how different professional and social groups indicated they voted.

Political Parties in The European Elections in Greece May 2014

The Supreme Court approved the applications to stand in the election (parties already represented in either the national or European parliaments and sitting MEPs are in bold):

Download the report here: ‘The State of the Children in Greece 2012’

Most vulnerable were the children in single-parent (where 74.7% were deemed at risk) and in large families (43.7%).

The report, conducted in collaboration with the University of Athens, also found a large reduction in numbers of children in Greece since 2001. The underage population shrunk 9% in the decade between 2001 and 2011 census, at a faster rate than the overall population, which fell by 1.1%.

It also found a significant reduction in social expenditure on benefits, with welfare payments decreasing by 4.%9 in 2011 relative to 2009.

A significant number of children in Greece had no access to health care because their parents had lost their state social insurance coverage, it said. 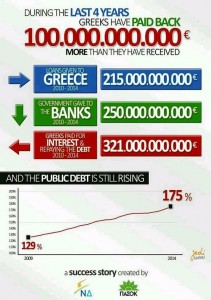 An international survey for the Organisation for Economic Co-operation and Development (OECD) published in November 2013 shows that the global economic crisis has had a profound impact on people’s well-being, reaching far beyond the loss of jobs and income, and affecting citizens’ satisfaction with their lives and their trust in governments. 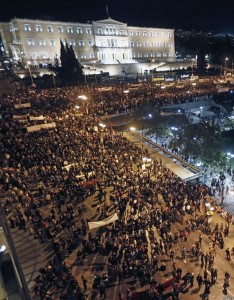 It was a day of shame when the Troika-imposed Memorandum 3 was approved in the Greek parliament in Athens on Wednesday 7 Nov 2012.

After a completely anti-constitutional ‘express process’ that lasted for less than 24 hours, the Greek Parliament voted for the new austerity measures prescribed in the 800 pages of the 3rd Memorandum from the Troika ( IMF, European Central Bank and the European Commission) bringing further cuts of 13.5 billion Euro. ( see detail 3rd Memorandum, 7 November 2012 )

Public Transport had come to a halt as employees held a two-day general strike called by the country’s two major trade unions GSEE and ADEDY, in protest against the package of new austerity measures. Local government employees, members of the POE-OTA union occupied the Administrative Reform ministry headquarters.

The second day of the 48-hour general strike of the trade-unions reached its momentum in late afternoon when more than 100.000 demonstrators gathered on Syntagma Square and surrounded the Parliament. Heavy rain did not prevent the citizens of Athens from joining the demonstration.

During the demonstration, the 71 MPs of SYRIZA USF temporarily left the Room of the Parliament, holding a banner with the slogan “You destroyed the country! Leave now!” and joined the demonstrators on the Square.

See the demonstration here and the video here of the Syriza MPs walking onto the Parliament balcony and then joining the demonstration in Syntagma Square, which is chanting “Neither Venizelos or Samaras: the Time for the Left has Arrived!”

But Riot Police had “cleaned up” the Square by the time of the final vote using water cannons (for the first time in Greece), stun grenades and extensive use of tear-gas. There were more than 100 arrests and at least 5 injured demonstrators. The voting process ended at around 00:30 am local time: the 3rd Memorandum has been ratified 153-128-18 with one MP absent.