The significance of the Golden dawn trial 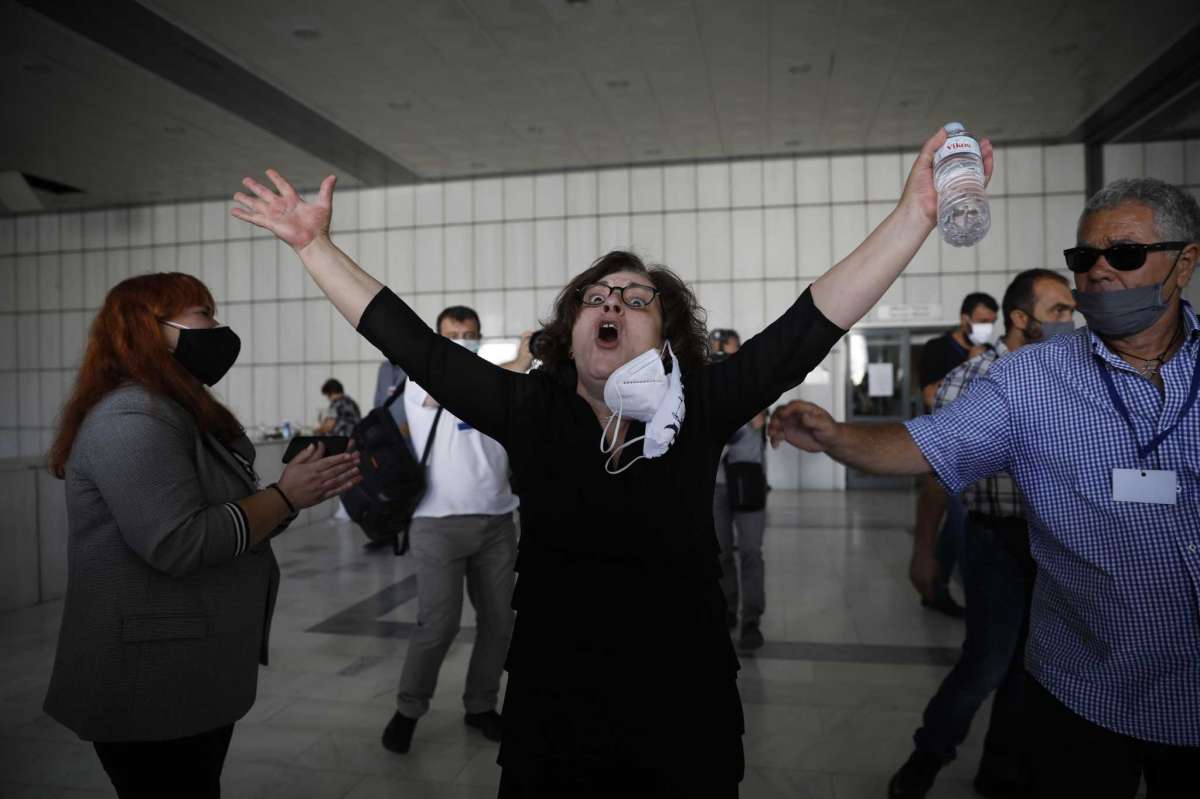 This was a marathon saga, that took five and a half long years to reach its finale! In many respects the Golden Dawn trial, had all the ingredients of an ancient Greek Tragedy, ending up with its own formidable “catharsis”, the formal conviction of this fascist monstrosity of a political party as a “criminal organisation”.

And this long saga with its decisive conclusion, has much wider implications than little Greece. In many ways it justifies the further cliché of being branded “an historic moment”.

Like many dramatic events in history, it had its own symbolic moment, provided by Magda Fyssas, the mother of the antifascist rapper Pavlos Fyssas whose murder by the fascist thugs seven years ago was one of the four key components of the trial. Her reaction to the announcement of the verdict is the one image that will remain locked into the memory for generations to come.

The clips of Magda’s emotional outburst on the steps of the court, in front of the huge crowd of demonstrators, looking upwards towards the sky and shouting to her lost son “You’ve done it my son – do you hear me? “YOU” did it”, could have been scripted by any of the great dramatists of antiquity.

Like so many others who’ve lost close family members in unfair circumstances, Magda, whom we met at our last Solidarity Visit to Greece, had her life these last seven years taken over by grief and the determination to have the culprits brought to justice. I sincerely hope that she would now be able to relax, after all those years of relentless pain, tireless campaigning and endless hours in the court. The verdict will not bring her son back to her, but at least she knows that his cruel death became the catalyst for bringing down a massive criminal organisation and the most vile fascist movement in modern Europe, saving probably millions of innocent people’s lives and livelihoods in the future, across Europe and the world.

Golden Dawn (GD) is/was a lot more than just another extreme right-wing party, or some kind of Greek version of the French National Front, the German AfD or our BNP; in the last decade it had become the most dangerous, openly Hitlerite, best organised and well-funded, effective neo-nazi party of Europe, with its own militia and slick propaganda machine.

Arising from a small group of long-standing Hitler adoring fanatics, linked directly over the years with Italian neo-fascist terrorists and extreme organisations across the world and generously well-funded by unknown sources, it exploited Greece’s debt crisis and managed to become the third largest party with significant numbers of MPs and MEPs, numerous offices and paid staff in every corner of Greece and in other countries. At its height, it ran military style training camps for its cadres of (black-uniform wearing, fascist saluting) volunteers and vigilante groups, terrorising neighbourhoods, attacking migrants, lefties, gays and anyone standing in its way and operating with apparent impunity due to its skillful infiltration of police, army and judiciary. Using populist campaigns (like food banks, or blood donations etc “for Greeks only”, mafia-godfather style “dispute resolution” services and so on) and a slick PR machine lifted almost entirely from Goebels’ Nazi propaganda copy-book, it became the model for modern neo-nazi parties across Europe.

A few years ago it seemed impossible to stem Golden Dawn’s growth, never-mind bring it down, but a formidable campaign by our Greek comrades and the international solidarity they mustered, managed to do it.

From one point onwards the trial was the main focus of this Greek anti-fascist campaign and became the final act of this phase of the drama, being itself a cliff-hanger drama up to the very last minute.

The increasingly self-confident arrogance and blatantly violent acts of Golden Dawn, together with the relentless campaigning of the Greek progressive movement, had started mobilising public opinion, emboldening individuals and sympathetic politicians to start ignoring the personal risks, the bullying and the intimidation and to begin fighting back.

Seven years ago the GD-organised fatal assault on Pavlos Fyssas, a popular anti-fascist rapper, became the catalyst that drew world-wide attention, forcing the rather tame Greek judiciary into action. This took the form of a host of indictments, from individual acts of murder and violence to the Mafia-style operations of Golden Dawn itself, all bundled together into a single super-trial.

Combining all these indictments into one trial created a complexity that enabled numerous delaying tactics and threatened to disarm the victims and their supporters. It is to the credit, foresight, tenacity and international support of the anti-fascist campaigners that they’ve managed against the odds to ensure the conclusion of the trial and the genuine involvement of the victims.

From the start, a key element of the trial was the widespread suspicion that, although the international outcry against the fascists’ crimes, (especially the Fyssas murder), forced these indictments, the whole affair would end up in a whitewash and a “not proven guilty” verdict.

The infiltration of the main security and law & order institutions (police, army, criminal justice) by GD supporters and its influence on Greece’s conservative parties (e.g. long-term historical connections between key members of the Greek government with Golden Dawn and other fascists) underpinned this suspicion. If that sounds like a fanciful conspiracy theory to some, the DPP’s last minute bombshell, asking in her summing up the court to return a “not proven guilty” verdict on the “criminal organisation” indictment, must have come as an eye-opening surprise to the doubters.

To this effect the anti-fascist coalition KEERFA and Fyssas’s family, with the help of sympathetic lawyers, used a clause in the criminal justice code that enabled those representing the victims to have a formal role in the proceedings, supporting the prosecution’s case; this enabled their lawyers to complement and strengthen the evidence provided by the DPP at the trial and, as a result, to control the risk of political or other pressures watering down its role.

I am convinced that this initiative (to which our GSC has made modest financial and campaign contributions over the years) played a key role in securing the guilty verdict on the “criminal organisation” indictment.

The importance of this is huge. If the court had found a few low-ranking GD members guilty of the individual murders, but GD itself not guilty of being a criminal organisation, it would have been a disaster. Not only would it have strengthened the GD propaganda that they are the innocent victims of “politically motivated” targeting by the “establishment”, but they would also gain access to circa 8m EUROs of state aid withheld from the party whilst awaiting the verdict. One can imagine the impact of such a boost to their propaganda and finances, both on their future operations in Greece and for their sister parties across Europe.

Some of the key contributors:

Magda Fyssas’ crediting of Pavlos’s death for bringing down the Golden Dawn monstrosity is justified. There were many key contributors to this outcome, but this particular crime and Magdas’s tireless campaigning were crucial components of the mechanism that led to this, hopefully the final, nail on GD’s coffin. To the very last minute the outcome was hanging by a threat and there is no doubt in my mind that without it we would not have succeeded.

In addition to Magda, it is worth drawing out the special contribution of Petros Constantinou, the Cypriot born founder and leader of KEERFA, a 10 year old coalition of anti-racist and anti-fascist movements in Greece. Petros, an Athens councillor (with ANTARSYA, a small Trotskyite party, that punches above its weight), has been a tireless and exceptionally effective campaigner for the rights of minorities, migrants and victims of racist and fascist forces and has played a key role in this affair.

KEERFA’s relentless campaigning, organising, fund-raising, keeping the trial on the news throughout the years and above all preventing it from collapsing on numerous occasions, have been crucial.

Amongst the numerous other contributions, one that has impressed me was by a London based outfit called “Forensic Architecture”, hired by the families’ legal team to help analyse the police evidence on Fyssas’s murder. This remarkable team analysed and synthesised systematically audio and visual scraps of evidence, proving authoritatively discrepancies in the official police evidence and providing a surprisingly clear and detailed, second by second account of the events surrounding the murder. I would urge comrades to invest a few minutes watching the YouTube video summarising their work on this issue (https://youtu.be/2uMYEJp02as)

In addition to our very modest fundraising support to the legal costs, we have tried to support and publicise the campaign in various ways. Our final contribution, in the last few days, was that, as soon as we were alerted to the DPP’s “not guilty” advice to the court, we issued a call to arms in the form of a statement signed, in record time, by a huge number of TU leaders, MPs, Peers and others. Although the Guardian failed to publish it in their letters page, our patron Jeremy Corbyn put it on his Facebook page yielding over 300,000 hits (that is, more publicity than Guardian’s letters page!).

Our Greek comrades succeeded once again in delivering a remarkable victory on behalf of all of us, and a welcome boost to the international fight against fascism.

However, the usual caveat must prevail:  we won a battle, not the war as yet. It is important not to rest on our laurels and relax, but to build upon this victory towards the next step, before the other side regroups and push us back to square one.

At our early GSC Solidarity Visits to Greece, our delegates were invariably impressed by the fact that every time we asked trade unionists and politicians what we could do from the UK to help them, the stock answer was always “fight austerity in your own country, because our struggles are linked”.

Similarly, I am sure that our Greek anti-fascists campaigners today would give us the same answer: “the best way to help us fight the fascists in Greece, is to defeat them here in the UK”.