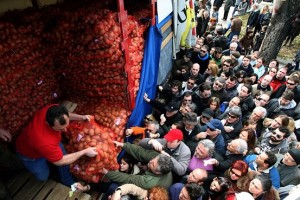 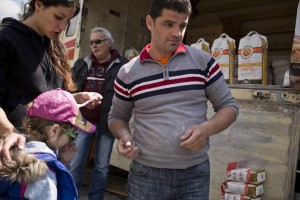 Angry over food prices that keep rising even as Greece suffers years and years of austerity, in 2011 ordinary Greeks teamed up with local farmers in a new grass-roots consumer movement to bring potatoes and other basic foodstuffs to market by cutting out the middle men.

Since it started, the potato movement – as it is known – has swept the country, taking root on the internet and spreading by word of mouth. Volunteers ranging from ordinary citizens to local mayors and even university authorities have all pitched in to help organize dozens of impromptu potato markets in cities across Greece, while the movement is now spreading to products such as olive oil, meat and other produce.

The roots of the movement date back to late 2011, when farmers in the northern Greek district of Nevrokopi refused to sell their spuds to wholesalers who were paying them 10 euro cents for a kilogram of potatoes at the same time that retailers were charging consumers between 55 and 80 cents — a markup of more than 450%.

It wasn’t the first time that Greek farmers had quarreled with wholesalers over the huge gap between the prices they receive and the prices on supermarket shelves. Almost every year Greece’s farm producers stage protests and block roads as an expression of their discontent. But faced with some 50,000 metric tons of unsold potatoes, the Nevrokopi farmers decided to appeal directly to consumers instead.

“We finally put an end to this pitiful practice where the only thing we wound up doing was to go on to the streets and demonstrate,” said Christos Gontias, a leading farmer in the movement. “We didn’t have a communications strategy. Now we understand we have to do something on our own.”

With the help of local volunteers — and the internet — the farmers began to organize direct consumer markets in various cities around northern Greece, offering their potatoes at 25 euro cents per kilo. The sales process is simple and circumvents established vendors of fruits and vegetables.

Usually, a local municipality will organize a potato market at the weekend, spread the word through the internet and take orders from citizens through an online form, which it then sends directly to the farmers. The actual sale takes place when the farmers roll up later in the week with their truckloads of potatoes.