On the 19th of January 2013, we flood the streets of Athens from every city and neighborhood of the country, workers and youth from every workplace, place of education and art. We occupy the city with music, chants and speeches, to shout that the Nazis are not welcome, that the coalition government’s racist policies of concentration camps, FRONTEX and of the denial of citizenship to the children of immigrants, enrage us as much as the barbaric measures that send hundreds of thousands to unemployment. 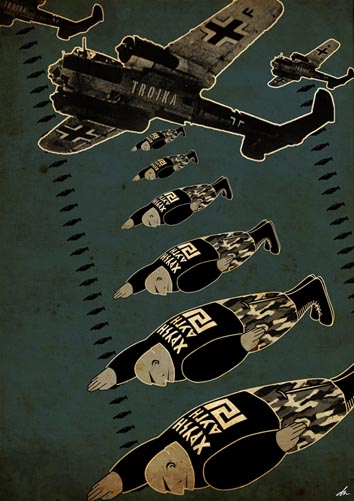 We cannot tolerate the rich and the government that sows poverty and deprivation, leads to suicides, sends homeless to queue at soup kitchens putting the blame for the crisis on immigrants, turning them to scapegoats, just like Hitler blamed the Jews for everything. This policy led to Dachau and Auschwitz camps, to gas chambers and the crematories with millions of dead Jews, Roma, Communists and gays. It led to the massacre of WWII, the Nazi brutalities in the occupied countries like Greece, with the martyr cities that were burnt, the lives lost in the blockades by the assassins of the “Security Squads” in Kalavryta, Kokkinia, Chortiati, Kontomari, Viano, Distomo and other places.

We cannot accept [Minister of Public Order] Dendias’ police attacking strikes and demonstrations with tons of chemicals and extending a hand of cooperation to the Neo-nazi assault squads of Golden Dawn, organizing racist pogroms in the neighborhoods with stabbings of immigrants, destruction of shops and house intrusions. It’s the same police that jails demonstrators like it did in Thessaloniki, where it reached the point of torturing the antifascist demonstrators of the motorbike demonstration. We are disgusted by the vulgar attack against artists like in the case of “Chitirion” theatre and the censorship of Dendias with journalists’ lay-offs and criminalization of journalist revelations. 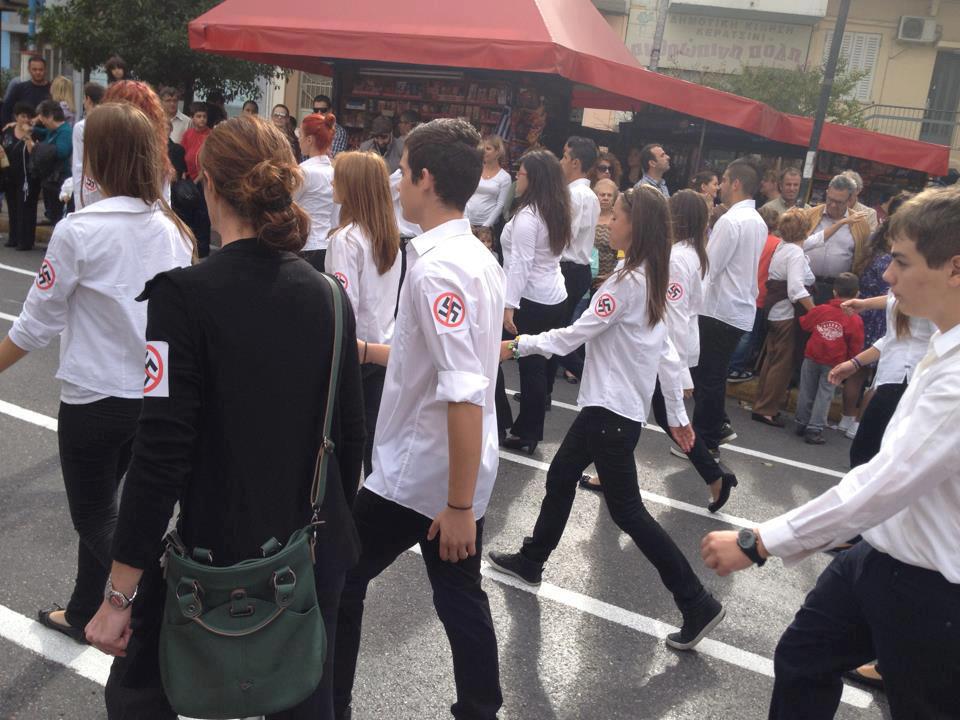 We can not close our eyes to the thousands of dead immigrants and refugees, women and children, being hunted by the guards of FRONTEX. We demand to stop the disgrace of the nazi-type concentration camps and the sweeping operations by the Greek police. The immigrants need legalization and the refugees need asylum, victims as they are of the imperialist wars, the dictatorships and the annihilating measures of austerity by the IMF.

Samaras rushed to proceed with the new law to deny the citizenship to the children of immigrants born in this country, with a decision by the High Court that shared the racist prejudice of New Democracy and the Golden Dawn. Thousands of children that are studying in schools are deemed illegal once they turn 18 and are asked to go back to the country of their parents where they have never been themselves!

This is why the last months an unprecedented antifascist uprising has unfolded. On the 24th of August thousands of immigrants sent their message to Dendias that they are not afraid of the police sweeping operations called “Xenios Zeus”. In the neighborhoods the racist pogroms were challenged everywhere. On the 28th of October, the teachers, the students and the antifascists showed who controls the streets sending the neo-Nazi of Golden dawn back to the sewers. “Neither in the parliament not anywhere, Nazis out of our neighborhoods” shouted thousands around Greece.

We call all workers and youth, intellectuals and artists, the immigrants’ communities, trade unions, student unions, school students, the local councils, all the committees against racism and fascism, the collectives of resistance, people’s assemblies to support the national demonstration in Athens on the 19th of January. In the city which sent the greatest message against the Nazi occupation and today sends a message of resistance to the memorandums and the Troika that Neo-Nazis are not welcome – they are racist killers!

We call for international solidarity with participation in Athens demonstration on 19th of January and antifascist action around the world outside Greek embassies.

Say it with a song…
Nazis out!
No to concentration camps!
Citizenship for all the children of immigrants!