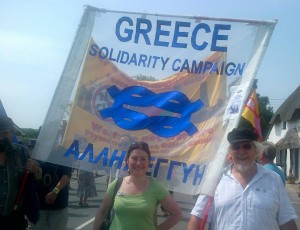 Last week the below resolution, moved by Mike Davis, was carried by Tower Hamlets (TH) Labour Party which covers Bethnal Green and Poplar and Limehouse Cconstituencies.

Tower Hamlets Coop Party/Labour Party condemns the vicious murder of anti-fascist Pavlos Fyssas by Golden Dawn neo-Nazis. We call on the Party nationally to voice condemnation and support calls for the outlawing of Golden Dawn.

We note the continued austerity programme carried out by the Greek government, backed by international financial institutions and other European governments. These attacks include sacking public sector workers, slashing salaries and pensions, worsening contracts of employment, cutting benefits and decimating public services.

WE note that workers, the unemployed, pensioners, the young and poor in Greece are at the sharp end of these attacks. But this austerity agenda is Europe-wide and affects us all.

The Coop/THLP condemns the Greek government’s actions bringing about the overnight closure of ERT (the Greek national broadcasting corporation) and applauds the Greek journalists and technicians, and the European Broadcasting Union, for their occupation of the building and the continued transmission of news and programmes to the Greek people.

TH Coop/LP calls on the Greek Health Ministry to end its appalling, degrading policy of forced HIV tests aimed at immigrant and marginal workers and the LGBT community, in the context of massive public health cuts.

THLP agrees to supports the Greece Solidarity Campaign, and invite a speaker.

TH Coop and LP supports the Medical Aid for Greece appeal, launched in response to a call for support from Greek anti-austerity campaigners in association with health unions, health workers and community organisations in Greece.