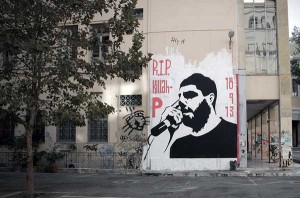 The latest events in Greece, sparked by the murder of antifascist activist and rap artist Pavlos Fyssas by members of the neo-Nazi party Golden Dawn, come at a time of a pan-European rise of radical right extremism and of diffusion of racist discourse. In this context Anti-fascist Action for Greece is organising a gathering at St Paul’s cathedral on October 27th 2013 at 2pm in order to raise public awareness of these issues and the threat that neo-fascist ideology and action pose not only to the Greeks, but also to people in Britain and other societies across Europe.

In Greece every year on October 28th, the Greeks commemorate the fight of the Greek people against Mussolini’s attack back in 1949 and the common resistance of the peoples of Europe against fascism. Renewing that symbolism and its historical significance for our times, the AAfG call on you to join the fight and to give the re-emerging nightmare of fascism the response it deserves.

Sunday October 27th St Paul’s Cathedral 2pm. Meeting point: Behind Queen Anne’s statue, towards the shops and road, and away from the Cathedral steps, to ensure we are not trespassing on Cathedral property.