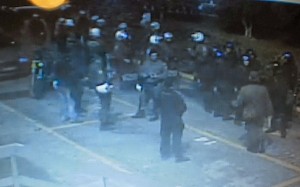 ERT, the Greek public broadcaster which the Government closed down in June and which has been occupied since then, was transmitting until the morning of November 7th, when riot police invaded it and expelled the broadcasters, journalists and other workers. Hundreds of members of the public gathered near the broadcasting building, but were prevented from entering it by riot police. Among them were MPs from main opposition Syriza and the Communist Party (KKE). Maria Antoniadis, the leader of the Athens journalists’ union Esiea, said: “We are
here to defend the right of our colleagues to work.”  Yiorgos Savvidis, president of the national journalists’ federation Posey, said ‘Ten days before the anniversary of the military junta’s storming of the Polytechnic ( in 1973), the government has invaded ERT in the same way.’  A General Assembly of ERT employees met at 4pm.

Syriza has made the following statement:

‘Two days after government’s “gift”  to the private channels owners, granting new digital licenses free of charge, the  memorandum government of PASOK and NEW DEMOCRACY parties, operating completely illegally, has added a black page to the history of the Public Television and the Democracy in our country.

Once again the dilemma Democracy or Memorandum is becoming actual.

The Greek people will stand against the abolition of legality, the underming of Democracy and will defend its dignity and liberties.

We demand the immediate withdrawal of police forces from the premises of ERT and the return of the building to the ERT employees.  November 7th, 2013 ‘

Messages of solidarity can be sent to the trade unions involved:ertopen@gmail.com and ntsimpidas@gmail.com . Messages also sent to info@stokokkino.gr will be read out on Radio Sto Kokkino (Red radio) which has offered its studios to ERT employees.