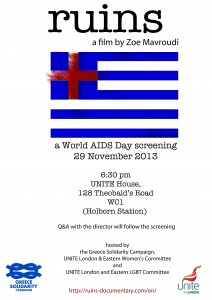 This ground breaking documentary by Greek film director, Zoe Mavroudi, on a witch hunt of HIV and women in Greece last year is being screened by the London & Eastern regional LGBT and Women’s Committees of UNITE the Union and the Greece Solidarity Campaign.  The film tells the story of the cyncial political campaign to use HIV as part of the anti-migrant and anti- ‘other’ rhetoric during the Greek general election of 2012. Many of the women arrested and forcibly tested for HIV give powerful personal testimonies of how this has destroyed their lives. Others appearing in the film are Greek doctors and HIV campaigners who give their views on how the women were shamefully used as political pawns. The law which allowed this gross infringement of human rights, has recently been reintroduced in Greece.

‘Ruins’ will be shown in the Diskus Room of the UNITE, 128 Theobalds Road, Holborn, London at 6.30pm on November 29th. The screening will be be followed by a Q & A witih director, Zoe Mavroudi.    All welcome