Speeches from the ‘Greece says No’ Victory Rally 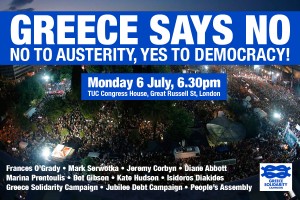 TUC Congress House was packed on Monday night to celebrate the remarkable victory for OXI/NO in Sunday’s referendum in Greece.

The Greece Solidarity Campaign’s rally was sponsored by the TUC and supported by the Jubilee Debt Campaign. You can find some of the speeches and messages below

I have one message for the Troika tonight: take a good look at Greece, because this is what democracy looks like.

The Troika’s intransigence on Greece to date amounts to nothing short of an attempted coup.

Greece is a country besieged by tragedy. People in Greece are suffering. Over 40% of children are living in Poverty, up from 23% in 2008. A quarter of the workforce is unemployed and over half of young people don’t have a job.

But they have not given into the bullying they have faced.

We have a democratically elected Government backed in a corner by the servants of capital, and yet the people have refused to be cowed. They have had their say and that must be respected. Greece is the birthplace of modern democracy, and all of us who believe in the EU as a body which should uphold human rights, value solidarity and respect the people’s right to govern themselves are united in urging the Troika to change course.

This weekend’s resounding victory for hope is underpinned by the failure of austerity in economic terms. The vast majority of the money lent by the Troika was used to bailout banks, pay off the private sector to accept restructuring, and repay old debts and interest from reckless lending. Less than 10% of the money has actually reached the people who need it most.

If this was a natural disaster we’d be doing all we could to assist Greeks in their time of need. But, because solutions to this economic disaster fly in the face of our Government’s obsession with stripping down the state, no help is at hand.

A growing number of voices have been calling for a conference of European countries to come together – much as they did for Germany in 1953 –  and allow Greece to cancel debts, and begin the process of stabilisation.

That’s the kind of action we want from our EU.

That’s the kind of vision and solidarity on offer from the trade union movement and other social movements, all around the world and to which the Greek people have responded in kind, keen to share with all of us the lessons they have learned about fighting for alternatives to austerity, for democracy, for a genuine voice.

Sunday’s referendum gave the Greek people a choice – but it also placed them at the barrel of a gun. They stood firm. Were brave and bold. Europe’s leaders now needs to be equally brave and bold, by casting their discredited ideology aside and instead offering the Greeks a deal which allows their country to be rebuilt.

The victory of the Greek people has signaled the beginning of the end of austerity not just in Greece but across Europe. We ‎ send solidarity greetings from the OXI BAR on Kalogria beach, in the Mani, Greece. Unfortunately we cannot be at the political meeting of the decade because we have to see through our stint in Greece. Solidarity Tourism is tough but someone has to do it. We hope many of you will come to Greece either for holidays or on a GSC delegation. It has been a tremendous week, seeing the Greek people swing first to the right under pressure of lying propaganda and then back to the left after the IMF admitted its mistakes, the demonstrations of support across Europe and a magnificent speech by Tsipras on Friday night. As they say here: mazi tha nikisoume/together we will be victorious. ‎ We will rejoin the home battalion soon.

“Thank you for being here tonight and thank you for being with us in Trafalgar Square and the other initiatives we took the last few days in support of Greece. I want to briefly set out what the recent events mean and make some suggestions about us and the future.
I’ll start by saying that tonight we should first celebrate and then … start panicking!
But let me start with the celebratory part.
The amazing result in yesterday’s referendum was undoubtedly a major victory for all of us; the Greek people, the people in other countries of Europe, the progressive, democratic voices of Europe.
The scale of the victory was impressive and beyond our wildest expectations, even the Greek government’s own expectations, who throughout the day were quietly optimistic that the NO vote will win, hoping that it would exceed a 5% margin; in the event it was a stunning 23%!! Our Greek sisters and brothers, the frontline of our war against the dark forces of international neo-liberal interests, despite what they are going though, once more, they did not let us down.
And the significance of this cathartic victory is larger than just strengthening the Greek government’s hand in the endless “negotiations” with the “lenders”; just imagine what the situation today would have been if we had lost this referendum. The Greek government would almost certainly have collapsed and this window of hope and opportunity for all of the people of Europe would have almost certainly closed. The stakes were that high.
Some of the immediate gains from this victory are:
• Since the referendum was announced, the IMF has taken a clear position that the Greek debt is unsustainable and that debt restructuring, including moratoria in repayments and write-offs, is an essential part of any future deal. EU leaders have made announcements about the need to invest in rebuilding the Greek economy and others about the need to address the immediate humanitarian crisis involved, as part of the negotiations.
None of these things were on the negotiating table before the decision to call the referendum, but they are now. I am not holding my breath that we will get these things without a lot more struggle. The interests behind the belligerent stance of the TROICA against Greece, are almost certainly the same interests that are prepared to bomb countries and kill hundreds of thousands; they are not likely to back down just because of the referendum. But we have survived until now, still fighting and we have made some small progress.

• The position of the government within Greece has been strengthened no end;
The leader of the main opposition party has already been unceremoniously ditched by his party, leaving his office in the middle of the night without even the traditional good-bye speech. The other opposition parties are backtracking fast, scared of complete annihilation.