Solidarity with the People of Greece! End the Financial Occupation 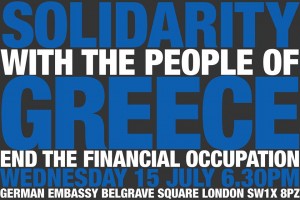 As part of Europe-wide demonstrations, the Greece Solidarity Campaign has called for a demonstration outside the German Embassy in Belgrave Square at 6.30 on Wednesday 15 July 2015.

The focus of the demonstration is on the need for solidarity with the people of Greece being greater than ever before. They are fighting an ever greater struggle, not only against austerity and illegitimate debt, but against the destruction of their democracy, self-determination and national sovereignty. It is our responsibility to work to end the isolation of Greece through both political and material solidarity: we cannot let the people of Greece stand alone – the development and strengthening of solidarity networks coordinating together across Europe must be our urgent priority.

Solidarity with the people of Greece! End the financial occupation of Greece!

Stop the looting of Greece!

In or out the Euro-zone, Greece will never stand alone.

We won’t forgive and won’t forget: the ‘Troika’ has to drop the debt.