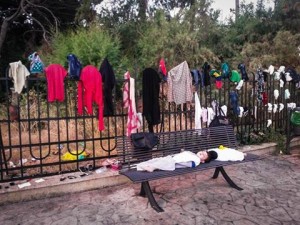 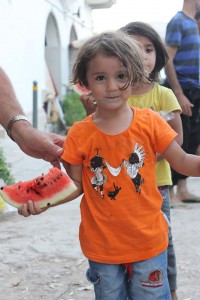 Report by Jane Deighton on her visit to Kos, 12th August 2015

Sudden end to humanitarian success for Kos refugees and volunteers

Kos volunteers’ high risk strategy this week forced the local Government to take responsibility for feeding the destitute migrants arriving on its shores ( by migrants I mean refugees and others under a strong compulsion to flee) and living freely in Kos town .  But news coming in from the BBC of compulsory relocation of migrants this Tuesday afternoon suggests this success was nothing but a calm before the storm. 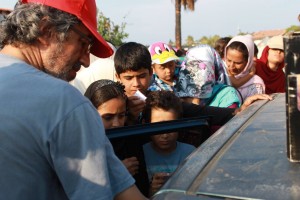 A group of 30/40 local people had achieved the extraordinary feat of resourcing food supplies and cooking and providing meals for the estimated   1000 refugees on a daily basis. The UNHCR had criticised the poor care the Government was giving migrants but recognised the difficult situation the Government itself was in.

Nevertheless 10 days ago the volunteers decided to stop. Their normal work commitments were taking their toll – and many are teachers who are due to start teaching soon as the summer holidays come to an end. They feared they could not undertake this massive feeding operation as well as their teaching. More importantly, they felt that caring for the refugees was the duty of the Government and their volunteering   was letting the Government off the hook.

So on Monday they stopped. There followed several shaky days – unnerving for the volunteers and apparently perilous for the refugees. Some refugees reported that they had no food, others very little and others reported that after 3 days the Red Cross moved into action.

On Saturday the volunteers announced the Government had taken responsibility for the feeding and that the volunteers would maintain a monitoring role.

There have been 7000 migrants in Kos this year. That’s about 1/5 of the total population of Kos. Most are men but about 20% are women and children.

Each of the people we met had harrowing tales of the home life they left and their journey to Kos. Most were from Syria, Afghanistan and Pakistan. All of them aspire to a safe secure and productive life in Europe, primarily Germany. Just one person we met hoped to go to the UK.

They live in the derelict Captain Elias Hotel – which is at the end of a road out of town. It has no internal water and no electricity. People are crammed into rooms, corridors, balconies and in make shift huts made of branches in the surrounds. 3 people, for instance, lived on and under the former reception desk.

They live also in tents and on cardboard boxes along the seafront, to the back drop of luxury yachts and the magnificent ancient Knight’s castle. There seemed to us to be a quiet peace between them and the many hundreds of tourists who walk or cycle past despite the starkest of contrasts in their reasons for being in Kos and in their means of survival.

The conditions are dire. But the migrants were, until today at least, free to move around Kos as they wished. How unlike the awful detention they may have had to suffer had they arrived in the UK. The migrants were also generally accepting of their lot – tensions arose from the delays rather than their living conditions.

In Kos the police document little more than the names, the family and country background of the migrants, and provide them with a “paper” permitting them to stay there for 20 days. They organise their ferry trip to Athens for processing.   Each day groups of men crowd the entrance to the police station to await the news as to whether they have their papers and their transport. Families are prioritised so single men have to wait for longer – rarely longer though than the 20 days permitted.

All those we spoke to said there were no investigations or decisions are made in Kos about the migrants’ future. The UNHCR says some processing is going on, but we did not see it.

Volunteers provided clothes, and, along with MSF, medical support . Resources are scarce. Donations of first aid equipment from London were put to use –out of the very plastic carrier bags they came in – the very next day after they were received – to treat broken bones, sprains, skin and digestive problems.

Women migrants bustled and queued to collect water donated by other tourists- it was being distributed on the basis of the size of the family – inevitably there was bickering as to the veracity of some of the women’s claims to have loads of children. Adults, were asked to queue, by gender, for second hand clothes volunteers were handing out from the back of a car.   Those we talked to appreciated their small piece of good fortune in being welcomed by these amazing volunteers – “the Greeks are our friends” we were told.

Today’s news in the BBC of violent relocation to a football stadium might well radically and sadly change that perspective – “the Greeks are our captors” may now be the refrain.

Jane Deighton, senior consultant at Deighton Pierce Glynn, together with Claudette Williams of the Institute of Education  and others have just visited the migrants in Kos on a voluntary basis and in their personal capacities

The August 5th Washington Post also published an article on the Refugees and Volunteers on the island of Lesvos here.