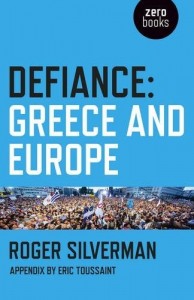 Roger Silverman has done us a great service with what he calls a “single straightforward account Greece’s story; to draw people’s attention to the rich historical background to today’s news”.

He tells us, in a plain, passionate and often humorous way, the struggles of the Greek people – initially 700,000, now by means of expansion and population exchange 11,000,000 – since the successful uprising against the Ottoman Empire led to the establishment of modern Greece in the 1820s.

It is a complicated tale. “In the 193 years since its foundation, Greece has had no fewer than186 governments – some of them concurrently”.  There is therefore plenty of room for differences of interpretation and Silverman is, in his own words, “frankly partisan”, lacing his description with delightful side comment aphorisms – e.g. describing the monarchy as “that symbol of national humiliation”.

And the story continues: with an influx of 1.4 million Greeks expelled from Asia Minor in the 1920s; a neo-fascist dictatorship in 1936 headed by General Metaxas, ironically best known for saying ‘Oxi’ (No) to Mussolini’s request to send his army into Greece in 1940; repulsion of the consequent Italian invasion; brutal occupation by the Nazis generating one of the biggest mass resistance movements, which was denied the spoils of victory by occupying British and US forces, a period of state McCarthyism with many left-wingers interned or in exile, a resurgence of the left in the mid-1960s, cruelly crushed by a group of Colonels whose incompetent Junta held power from 1967 to 1974, when an ill-planned intervention in Cyprus plus the risen population brought their downfall.

The restoration of democracy and, in particular, the rise of the new social democratic party PASOK from 1980 led to a degree of political stability and something approaching a European standard of living for many citizens, which is associated with preparation for and entry into the European Union.

Then in 2010, the international financial crisis found its weakest link in Greece, where debt bail-outs from the Troika (of the EU, IMF and European Central Bank) and failure by all established government parties to find a solution, caused a catastrophic collapse in standard of living affecting all but the richest.

From 2010 a popular resistance far surpassing anything seen anywhere else in Europe in over fifty years grew up in Greece with mass assemblies in the squares, over thirty general strikes and the development of a network of solidarity support in the form of social pharmacies and people’s markets.

On this rising tide, Syriza, a relatively unknown left wing coalition of parties, led by Alexis Tsipras – was swept to power with its share of the vote increasing from 4.6% in October 2009 to a triumphant 36.3% in Jan 2015.

The question which dominates the last half of Silverman’s book is what was possible for a far left Greek government, in such a crisis-ridden country with 3% of Europe’s population, generating only around 2% of Europe’s GDP?

Unlike some less sophisticated comrades, Silverman is not unsympathetic to Syriza’s dilemma. He recognises that the rise of Syriza helped spark a frisson of hope, similar to Podemos, the Portuguese coalition government, Barry Sanders in the USA, the election of Jeremy Corbyn.  It could be catalytic but was unable to transform the situation on its own.

In 2015, after 4 months of trying to face down the powerful and vindictive forces of EU finance ministers and international finance, Tsipras called a referendum and the Greek people delivered a massive 62% (Oxi) rejection of the terms on offer from the European institutions.

Then, to almost everyone’s surprise, Tsipras did a somersault and went back to the ‘institutions’ and ended up signing a new memorandum of cuts in return for a bail-out which was every bit as harsh as the previous two.

Was this forced on Tsipras having assessed the prospects for Greece of holding out, or was it an unnecessary loss of nerve and betrayal of the Greek people?

Silverman assesses the real possibilities for the Syriza Government and notes that “the Greek misfortune is that they launched their struggles a little ahead of the rest of us and found themselves facing the enemy alone.”

Nevertheless his main analysis is close to that of the Popular Unity MPs who split from Syriza after what they saw as ‘capitulation’, but failed to reach the 3% threshold for winning MP seats in the September 2015 election, which Syriza won with 35.5% of the votes.

This story is far from over. International solidarity is still vital. As I write, it is reported that Golden Dawn has organised attacks on refugee camps in the Aegean Islands.  Greek families are struggling to make ends meet on wages and pensions which have been cut by 30-50%, with unemployment around 25%, and 300,000 Greeks in economic exile.

As William Morris said: people “fight and lose the battle and the thing they fought for comes about in spite of their defeat, and when it comes turns out to be not what they meant, and other people have to fight for what they meant under another name.”