Never Again! Marking 50 years since the Military Coup in Greece & Celebrating its Overthrow

The Greece Solidarity Campaign and Anti-Fascist Action for Greece invite you to: 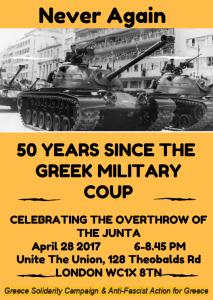 Before dawn on April 21 1967 a far-right group of ‘colonels’ ripped apart Greek democracy.

When the upcoming elections looked likely to lead to another centre-left government (after King Constantine dismissed the 1965 one), the Colonels acted.

Tanks appeared at strategic points in Athens and some 8,000 leftists were arrested.

Later that day King Constantine legitimated the Coup. He appointed a new prime minister who formed a military government.

The Colonels issued a decree instituting military law, abolishing the constitution and cancelling the elections. It even became illegal to listen to music by resistance figures like Mikis Theodorakis and Melina Mercouri.

American Vice-President Spiro Agnew welcomed the junta as ‘the best thing to happen in Greece since Pericles’. The British Labour Government hesitated briefly and then recognised the coup and accepted Greece staying in NATO.

Resistance:  Resistance to the Junta grew in Greece, particularly among students. On February 21 1973 they occupied the University of Athens against the forcible drafting of ‘subversive youths’.

An occupation of Athens Polytechnic then sparked mass demonstrations and new military repression.  On November 17 1973  24 students and demonstrators were killed and hundreds injured.

In July 1974 the Junta staged a coup against the President of Cyprus, Archbishop Makarios, who had called for Greek officers to get out. This was followed by the Turkish invasion of the North of the island. The Greek military’s role then caused mass defections from the Junta, which collapsed immediately.

In December 1974 a two to one majority of Greek people voted in a referendum to establish the Third Hellenic Republic. November 17 then became a national holiday in schools and colleges throughout Greece.

( From an article by Steve Jefferys, then an LSE student who was one of those who occupied the London Greek Embassy in April 1967, originally published in Searchlight magazine). 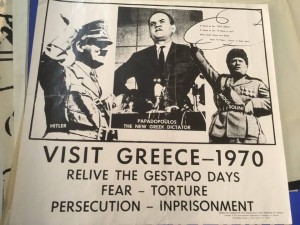 This entry was posted in Archive, Events, Fascism, News. Bookmark the permalink.