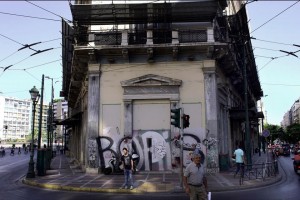 Let’s stop playing: “Blame the Greeks”.  Babies, adolescents and young adults did not cause Greece’s debt disaster. But they are paying for it – with their lives.

When writing about Greece, it is all too easy to look only at the economic figures and miss the human impact. What does a 27% fall in GDP feel like to the people who are living through it? How does turning a fiscal deficit of 15% of GDP into a primary surplus of 3.5% affect the public services on which people’s wellbeing – and even their lives – depend?

Some people justify Greece’s terrible depression and severe fiscal austerity on the grounds that they are necessary to “reform” the Greek economy. Others even argue that Greeks “deserve” poverty and deprivation. They had a massive party at other people’s expense, after all. Now, it’s payback time.

I have heard a lot of this recently. So I am grateful to the medical journal The Lancet for providing me with some ammunition to fire at those who want to play “blame the Greeks”, or who believe that the austerity inflicted on Greek was both mild and necessary, or who simply can’t see the humans behind the numbers. The Lancet has published an analysis of changes in life expectancy in Greece during the recent crisis. It is heavy on numbers and light on anecdote, but even so, it makes grim reading.

Greece’s mortality increase stands in stark contrast to global death rates, which fell during this time. Even in Western Europe, where death rates rose slightly overall, no other country experienced a deterioration on this scale. Cyprus, Greece’s close neighbour, also experienced some worsening of mortality rates around the time of its financial crisis and recession, but not on the scale of Greece. Among the countries included in the study, Greece’s case appears to be exceptional.

But what is causing these additional deaths? The report says it varies with age:

…adverse effects of medical treatment, self-harm, and several types of cancer stood out as consistently increasing in Greece across all ages… Within specific age groups, other causes are apparent, with rapid increases in deaths due to neonatal haemolytic disease and neonatal sepsis in children younger than 5 years, and prominent increases in self-harm among adolescents and young adults. Greek adults aged 15–49 years had increased mortality due to HIV, several treatable neoplasms, all types of cirrhosis, neurological disorders (eg, multiple sclerosis, motor neuron disease), chronic kidney disease, and most types of cardiovascular disease except for ischaemic heart disease and stroke.

Let me translate this piece of medical jargon into plain English:

·         Adolescents and young adults are killing themselves.

·         Adolescents and adults are dying of diseases associated with poor diet, alcohol abuse and smoking, and of treatable illnesses.

The report additionally says that HIV/AIDS incidence doubled between 2010-12 when the government temporarily stopped distributing syringes. Tuberculosis also seems to have increased among adult Greeks.

The rise in deaths from self-harm among young adults is particularly striking. This is the human cost of Greece’s appallingly high youth unemployment rate. At the height of the crisis, in 2013, it was 58.21% – over half of all young adults. Even now, despite half a million young people leaving the country, it is over 40%. Greek young adults face a stark choice – leave, or face a lifetime of unemployment. It is hardly surprising that self-harm and suicide have increased.

But despite this epidemic of despair, the largest mortality increases are not among young adults, but among babies and the very elderly. This speaks to a crisis in healthcare.

The report says that as part of the bailout conditions, Greece’s total healthcare expenditure (public and private) fell from 9·8% of GDP in 2008 to 8·1% in 2014. An article published by the Lancet concurrently with the paper notes that, under pressure from the Troika, the Greek government cut public healthcare expenditure to 6% of GDP.

Since the implementation of the austerity programme, Greece has reduced its ratio of health-care expenditure to GDP to one of the lowest within the EU, with 50% less public hospital funding in 2015 than in 2009. This reduction has left hospitals with a deficit in basic supplies, while consumers are challenged by transient drug shortages.

Hospitals lacking basic supplies, patients who can’t obtain the drugs they need…..anyone would think this was a war zone, not an advanced country that has got itself into a spot of difficulty with its creditors.

Unemployment and poverty shut large parts of the population out of private health care too:

…nearly a quarter of the population lost health insurance from the national health-care programme due to longstanding unemployment, while more than 20% reductions in the minimum wage reduced consumer buying power.

The report concludes that although Greece’s ageing population, exacerbated by the flight of its young and skilled, contributes to the increase in mortality rates, the principal reason is the harsh austerity programs imposed on the country under the terms of its bailout. It is hard to disagree.

Let’s stop playing “blame the Greeks”. Babies, adolescents and young adults did not cause Greece’s debt disaster. But they are paying for it – with their lives.