Art collectives, touring exhibitions and pop-ups are thriving in the tough economic climate 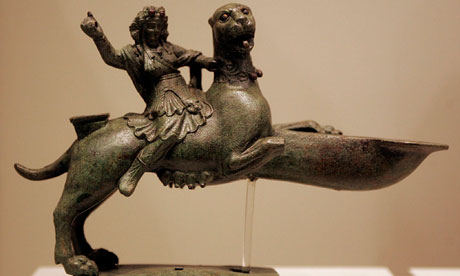 A bronze lamb in the form of a female panther ridden by the god Dionysus at the Museum of Cycladic Art in Athens. Photograph: Orestis Panagiotou/EPA[/caption

Despite the economic crisis in Greece– or perhaps because of it – the art scene in Athens is flourishing. The city is seeing a turn towards touring exhibitions and ephemeral performances, events and discussions more suited to the tough economic climate than commercially driven work catering to rich buyers.Today, Athens boasts more than 50 non-profit, non-hierarchical and self-organised art collectives. Many of the groups occupy spaces temporarily, collaborating with other institutions and groups.

The collective Filopappou has shown work in major galleries such as Beton 7, Gazonrouge and the Museum of Cycladic Art, while other groups choose to use Athens as their stage.

Reconstruction Community, a collective of architects, artists and theorists, also supports ongoing research and projects related to the metropolis.

One innovative work produced by the group is a sound-map of Athens, which is available online along with essays and project outlines commissioned by the group.

Artists are taking the visible signs of economic downturn and appropriating them for creative ends, with empty shops often becoming home to pop-up exhibitions.

Other unusual spaces have been used as exhibition venues too: in spring, the gallery Camp (Contemporary Art Meeting Point) produced Back to Athens, a festival in the city centre where artwork was installed within shops, offices and restaurants.

Earlier in the year, Kappatos gallery arranged a three-week event showcasing the work of emerging artists across 30 rooms in a hotel in the Kolonaki district.

Last month it organised Systems, which invited all the independent art groups in the city to come together and debate their viability at a time of crisis.

There has also been a notable influx of international artists, further helping regenerate the scene.

Last month, students at Athens and Madrid schools of art organised an exhibition called Thermopolis. One student was mummified in red and white tape on a street corner near Syntagma Square, while “welcome home” mats were laid across the pavements nearby.

In April, the Greek artist Augustus Veinoglou, who lives and works in Edinburgh, set up Snehta, an international residency programme for young British artists.

Selected artists are invited to spend up to three months in the Greek capital, where they are asked to create pieces in response to the city and exhibit them in Kypseli, the suburb where the scheme is based.