Desperate to keep the police on side, is the Greek government overlooking violent abuses? 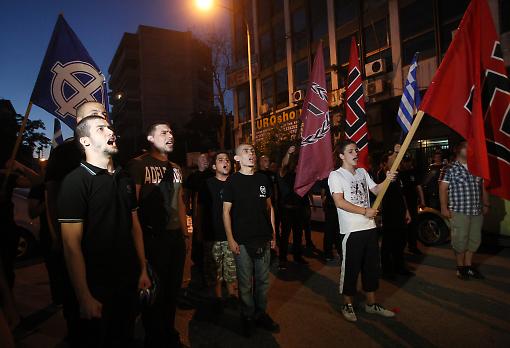 Members of the Greek extreme-right party Golden Dawn sing the national anthem out of the party’s office in Thessaloniki. Photograph: Getty Images.

On Monday night, Nikos Dendias, the Greek Minister of Public Order, was a guest on New Folders, a well known Greek TV show, presented by journalist Alexis Papachelas. A relaxed and slightly ironic Dendias, seemed to be having a good time deflecting all the serious questions D Tsoukalas, the SYRIZA MP who was also a guest on the show, threw at him. By carefully avoiding  answering  any and all questions, Dendias only looked anxious for two things: To not allow Tsoukalas to sidetrack him from his  immigrant-bashing  agenda , and to not displease the very same police force that stood by while a man was attacked outside a theatre, and , according to the Guardian, allegedly tortured 15 detainees after an anti-fascist demonstration a few weeks ago.

Dendias defended the police in every turn, going as far as to say that the detainees were lying and the truth would shine once the coroner’s report was out. That he was in fact in possession of that knowledge. “Why haven’t they filed for lawsuits if they are telling the truth? These are lies and I will bring the Guardian to justice for slandering the Police force and our country. The police is there to protect our citizens and is loyal to the state. Isolated cases of violence might exist, but they will be brought to justice”. He repeated the same claims in the Parliament the next day.

Little did he know:  on  Friday  afternoon, the coroner’s report was made available to the lawyers of the victims according to Avgi newspaper. Heavy bodily harm, extensive abuse, injury by pointed object (allegedly one of the detainees was “stubbed” with a taser, electrocuted to submission and then brutally beaten while still on the ground). The 15 people arrested two weeks ago stated that they were simply waiting for these reports, and of course they will file a lawsuit against the Greek Police.

A silence has befallen Dendias since. Trying to appear sympathetic towards the Greek police is not working well for him since they hang him out to dry  at every opportunity . By declaring that he will establish  a new task forces to “confront heavily armed criminals” (translating to extra pay for anyone who joins) and that he will try to deal with the fact that “their wages are stuck in the 60s”, he is trying to show that he and PM Samaras are there for them. He knows he has to, as  police officers’ support is fast shifting from the government to the  far-right movement Golden Dawn. But the police is by now well beyond his control.

“50, maybe 60% of the police are with us now” Illias Panagiotaros (an MP with the Golden Dawn who participated in the attacks outside Corpus Cristi last week) admitted to Newsnight’s Paul Mason last Wednesday. Dendias, desperately trying to outflank the neo-nazi party from the right and win over the police at the same time, is failing miserably. His empty anti-immigrant rhetoric and his sucking up to the police, leads nowhere but to the complete loss of his ministry’s status.

There is no better indication of this than what happened this Sunday in Skouries Halkidikis. A  demonstration was called  to oppose the opening of a gold mine that would destroy much of the ancient forest the area currently enjoys, permanently gut the mountain and pollute the area extensively, essentially ending any hope of sustainable tourism growth, ended up being violently attacked and dispersed by riot police. The demonstrators were no hooded “anarchists” and “far left elements”, but concerned locals, who don’t want to see the natural environment around their houses destroyed.

Reports started coming in late in the evening: Police had blocked the road cars carrying demonstrators up the mountain used. Passing between the cars, they started breaking windshields with their batons, and in some cases shooting chemicals inside cars. If this sounds like an exaggeration, this “isolated incident” should serve as an example: An elderly man was arrested (after being driven to the hospital with heart issues) and charged with attempted manslaughter. The reasoning behind this charge? When the tear-gas canister was shot in his car, the man lost control of his vehicle and rammed a tree, thus endangering other drivers. In another “isolated incident” confirmed by multiple eye-witnesses, a 55 year old woman was forced out of her car, made to kneel and then kicked to the point where she had to be driven to the hospital by other demonstrators as her knee had sustained severe injury.

Later that night, when people tried to help those detained at Polygyros police station, a police officer in plain clothes attacked Katerina Igglezi, an MP with SYRIZA, pushed her and hit her with his baton. When she told him she was an MP he shouted his name with defiance and asked her what does she think she can do about it, as can be seen in the video of the incident. She went on to state that she will in fact sue him.

But he, like every police officer willing to go the extra mile, knows very well that probably nothing will happen to him. Dendias will not seek punishment, as in other similar cases.  The police now operate well above the “laws of men”. The fact that Golden Dawn supporters reportedly attempted to intimidate locals  during an earlier set of demonstrations, is telling. Their excuse the fact that SYRIZA and other left wing factions support the locals, is of no significance. That they were present to defend capitalist interests once again, is.

El Dorado, the Canadian mining company, might be strangers to such controversy, but Greece certainly isn’t. For months Keratea resisted the opening of a dumping field next to their houses and the ancient monuments that populate the area. For months, riot police intimidated them, attacked them, brutalized them and made their lives a living hell. In one of the worst incidents, a pregnant woman lost her baby when tear-gas was used right outside her house and caused her to pass out.

In the meantime, Golden Dawn is having a field day while MPs from other parties are assaulted and common citizens are charged with extraordinary charges after being attacked themselves. Their own MPs enjoy impunity, never heard of before in a functional democratic state. Mr Dendias will speak again about “isolated incidents” if you put this question to him. But the reality of the situation leaves no doubt, and our government looks comfortable with what’s happening. Their unwillingness to reform the police is now more than obvious.

In the past few days, there have been rumours of a Greek cabinet reshuffle. In a decent, functional government, there would be no place for Mr Dendias. But in our current state as a country and as a people, Dendias will remain where he is. If he doesn’t, I am really afraid of who might take his place, and what  they would do.

From the New Statesman