In Greece, the attack on press freedoms and the collusion with Golden Dawn are indicative of a government in panic and a crumbling hegemonic order. 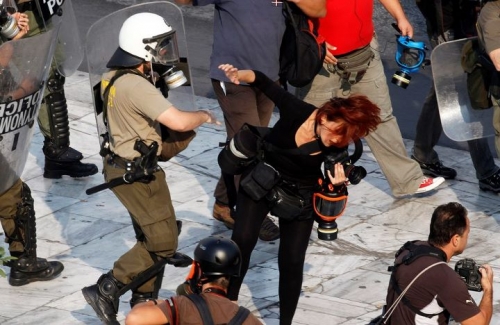 Image: photojournalist Tatiana Bolari is slapped in the face by a policeman while covering a protest in Athens in October 2011.

You may have heard the story. A couple of days ago an arrest warrant was issued by a Greek prosecutor for Kostas Vaxevanis, a Greek investigative journalist. His crime? HOTDoc, the magazine he edits, published a list of 1,991 Greeks who made $1.95 billion in deposits in the Geneva branch of HSBC bank in Switzerland.

It’s a list that was stolen by former HSBC employee Herve Falciani in 2007, and that former French Finance Minister Christine Lagarde submitted to former Greek Finance Minister Georgios Papakonstantinou. While other countries (including France, Germany, and the UK) made use of their respective lists to investigate potential tax evasion, though, the Greek list just “disappeared” somewhere between the offices of Georgios Papakonstantinou and his successor, Evangelos Venizelos — now President of PASOK — for two whole years. Yet, it took the Greek government only a few hours to arrest the journalist who discovered and published it.

The case put into question not only the independence of the judiciary in Greece, but also the state of freedom of expression and freedom of the press in the country. And what makes things worse is that Vaxevanis’ case was by no means an isolated one.

Around a month earlier, an MP of the neo-Nazi Golden Dawn party called for the intervention of the Minister of Justice into the case of a 27-year-old who had created a Facebook group satirizing a well-known monk, paraphrasing his name from Elder Paisios, to Elder Pastitsios (referring to “Pastitsio”, a greek famous dish with pasta and minced meat). Again the Greek state showed excellent reflexes! Within a few hours, the 27-year-old was arrested on charges of blasphemy (!) and insulting religion, while the police entered his house and seized his computer and Facebook account.

The Greek state’s reflexes improved even more, though, in the case of the dismissal of journalists Kostas Arvanitis and Marilena Katsimi from the Greek state broadcaster NET/ERT for criticizing Public Order Minister Nikos Dendias over the torture report of the 15 anti-fascist activists that the Guardian (and not the Greek media) published, which led the Minister to accuse the British newspaper of “spreading lies”, also threatening it with legal action. Apparently, professional forensic examination of the 15 anti-fascists showed that torture had indeed taken place, and the journalists made the following comments on their Morning-magazino today:

Ms. Katsimi: … and here are the forensic findings for the 15 arrestees, published in the Guardian and for which case Mr. Dendias wanted to sue the Guardian.

Mr. Arvanitis: Didn’t he sue it?

Ms. Katsimi: He didn’t because the findings show that it is indeed a felony.

Mr. Arvanitis: And now, is he going to resign?

Ms. Katsimi: I do not think that he would resign. But it was strange what Mr. Dendias said — as if he knew the findings, which is not normally done… on the one hand is good that he didn’t know the findings, but on the other hand, how can you say such a thing?

Mr. Arvanitis: And now what? Would he apologize?

Mr. Arvanitis: Wow… that’s difficult for Mr. Dendias. And he is from the same place as you, from Corfu.

In a matter of minutes, Aimilios Liatsos, the General Director of the State Broadcaster, announced to the journalists that they would be “cut off” from the news magazine “until further notice”, with the following statement:

“The General Directorate of ERT fully respects the rules of the free press and it proves in daily practice the broadcast of all views. However, it can not accept the violation of the minimum standards of journalistic ethics.

“The presenters of the daily magazine ‘Morning Information’ on NET, Mr. Kostas Arvanitis and Mrs. Marilena Katsimi, made unacceptable insinuations against the Minister of Citizen Protection, Mr. Nikos Dendias, and this without giving him the right to express his own opinion, while with their comments they appeared to prejudge the outcome of the judicial decision.”

Of course the incident was met with outrage by the Greek public, which characterized it as “junta-style censorship”.

As if this was not enough, the journalist union POESY announced today that another journalist of the state broadcaster ET3 was also fired on October 26, 2012, because she noticed a “strong military presence” outside Agios Dimitrios Church in Thessaloniki during the festivities for the city’s liberation — and she dared to say it on air! Later on, on the same day, a young man was arrested because on his Facebook page he had uploaded photographs showing Greek policemen together with members of Golden Dawn, during the national holiday. The official accusation: violation of private data law, and spreading false rumors that may harm the country’s image abroad.

All these incidents are indicative of a government (and a political system in general) in panic; one that does not hesitate to censor freedom of speech in order to protect the hegemonic political, cultural, and economic elites it is serving. While it is now soon to announce further austerity measures of 13.5 billion euros, which will again disproportionately hit the middle and lower classes of the country, it has been protecting for two years the 1.991 “possible” tax evaders, all the while pampering the neo-Nazi Golden Dawn party by responding immediately to every ridiculous little prompt of theirs. At the same time, it is secretly torturing anti-fascists in the Golden Dawn headq… excuse me, police stations — and is ready to silence within hours anyone who may express an opinion critical to the government’s.

Welcome to the Greece of the Memorandum.

Here, freedom of speech has been suspended, until the next loan-instalment is released.