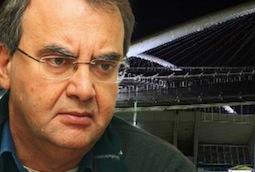 The Greece Solidarity Campaign is appalled by the brutal attack on Syriza MP Dimitris Stratoulis by the fascist thugs of ‘Golden Dawn’ and have written to him expressing our solidarity. We have been here before – with Hitler and the nazi party in the early 1930s. The rise of Chrysi Avgi is the direct result of the extreme austerity measures imposed by the Troika and implemented by the Greek Coalition Government. We are in contact with Syriza and, in the new year, will be supporting demonstrations against fascism and in support of democracy, in the UK and across Europe. We have written a letter to Dimtris which has been widely circulated in Greece:

More from The Guardian

We learned on Sunday evening of the brutal assassination attempt on you by Chrysi Avgi thugs. We congratulate you on your bravery and presence of mind when under attack. We know from experience how badly even verbal aggression can shake one up.  We trust you are recovered and that you and your family have people around you to keep up your strength.  Please accept this message of solidarity from the Greece Solidarity Campaign (UK).

We see our role as standing beside you against the forces of fascist evil. We will be protesting outside the Greek Embassy in London in January. Do let us know if there are other steps we can take.

We have been here before: the rise of Chrysi Avgi is the direct result of the extreme austerity measures imposed by the Troika and implemented by the Greek Coalition Government.  We know that poverty and deprivation can lead the exploitation of desperate people by vicious forces who put the blame for the crisis on immigrants, turning them into scapegoats, just as Hitler blamed the Jews for everything.  This process led to Hitler’s extermination camps, destruction of 2,000 Greek villages, massacres and Nazi brutality of World War 2 – particularly in Greece.

We have a special responsibility because we also know that British governments, at the end of the war, let many fascist collaborators escape justice, with dreadful consequences which we had hoped were ended after the overthrow of the Junta in 1975. We have seen Chrysi Avgi squads attacking immigrants, market stall holders and artists at the Chitrion Theatre – with the complacency or complicity of the Greek police which seems to spare no cost or effort on tear gas against trade union and popular demonstrations.

We have also observed the opposition from Syriza and left activists, the message from immigrants demanding justice to Minister of Public Order Dendias on 24 August, and the demonstrations on 28 October by thousands of teachers and students around Greece demanding: “Neither in the parliament not anywhere, Nazis out of our neighbourhoods”. Along with millions of progressive people throughout Europe we are in association with that resistance.

We have to stop fascism in its tracks wherever it manifests itself, before it takes hold and spreads.

Please tell us if there is anything specific we can do. We hope, in spite of these terrible circumstances, you and your loved ones can achieve some peace and rest over the Christmas period.

Be sure that millions are with you.
Aλληλεγγύη και φιλία – solidarity and friendship

COMMENT FROM UNITE AGAINST FASCISM ON ATTCK ON SYRIZA MP

“Unite Against Fascism deplores the attack by Golden Dawn fascists on Dimitris Stratoulis, an MP of the Syriza party, and we offer him our full solidarity. On the same day the parliamentary fraction of Golden Dawn attempted with its supporters to storm into the neighbourhood of Nikaia in Athens. There was a massive response from local people who reject the neo-Nazis, their violent racism and the threat to democracy in Greece. The fascists ended up mustering just 150 hardcore members and were left cowering behind police protection. Serious attacks on immigrant communities in Greece are happening daily. But so too is resistance from across the society.

“Last Saturday saw a moving silent procession in Athens against the threat of fascism. It enjoyed cross party support and backing from leading cultural figures. The same coalition of forces, growing day by day, is supporting a national rally in Athens against racism and fascism on 19 January, with international backing. UAF has called a solidarity protest to the Greek embassy in London on that day. Already it is gaining support from a range of communities, civil society organisations and cultural and political figures, who are concerned about the rise of fascism in Greece and Europe, and the threat of the far right and xenophobia in Britain as well.

“The cowardly attack on MP in Athens should sound an alarm.”

Europe wide day of action: London Anti-fascist city
Saturday 19 January 2013, demonstration outside the Greek embassy, London
Called by Unite Against Fascism
Supported by the Greece Solidarity Campaign and Solidarity with the Greek Resistance

More on this story