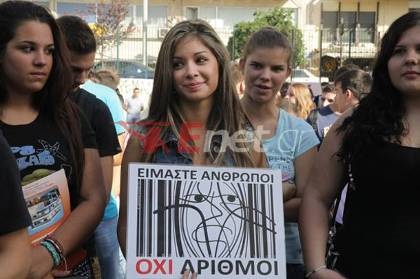 “We are people, not numbers.” A student holds a placard at a school opening ceremony in Nea Ionia, Athens, 11 September 2013 (Photo: Spyros Tsakris)

Alexis Tsipras, the leader of the main opposition party Syriza, said that the first and most important lesson that students should learn is the need to help one’s neighbour. He also appealed to pupils and parents to support the teachers in their strike “because it was a struggle to keep schools on their feet”. He also said that the strike was more than education and that it was a struggle for a better society. He said he hoped the strike would lead to a “massive wave of resistance”.