Support for the university and school teachers striking in Greece 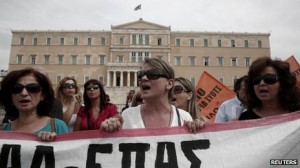 SOLIDARITY WITH THE SCHOOL AND UNIVERSITY TEACHERS OF GREECE!

Greece Solidarity Campaign stands foursquare behind the actions launched by university and school teachers in Greece to stand up for education and employees rights. We will do everything we can to spread a broader understanding of the issues in your struggle and evoke moral and practical support. We note that:

GSC further notes the September 6 “Open Letter to Parents and Staff” of professors and employees of the National Technical University in Athens. The government has:

As the “Open Letter” says:

“Briefly, the National Technical University of Athens is being pushed into becoming a postsecondary training institution, a vocational training institution, with easy and fast-to-get certificates, for a future of certain unemployment, with a few impoverished workers and professors who will not care about how to teach but only about how to survive. Then you will be asked to pay tuition fees.”

We further note that the professors and employees of the National Technical University of Athens have decided to “stand up with our heads high, instead of remaining idle and hopeless”, and to continue the University’s shining tradition, steeled under Nazi occupation and the struggles against the Colonels’ dictatorship.

Greece Solidarity Campaign declares its full support of OLME and the staff at National Technical University. We will do everything we can to spread news about your struggles among trade unions, working people and the population at large in the UK and to organise moral and material support for you.       September 2013