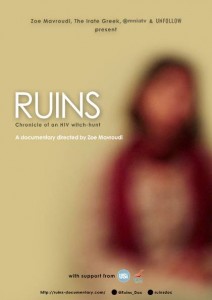 This ground breaking documentary by Greek film director, Zoe Mavroudi, on a witch hunt of HIV and women in Greece last year  can now be watched online. The film tells the story of the cynical political campaign to use HIV as part of the anti-migrant and anti- ‘other’ rhetoric during the Greek general election of 2012. Many of the women arrested and forcibly tested for HIV give powerful personal testimonies of how this has destroyed their lives. Others appearing in the film are Greek doctors and HIV campaigners who give their views on how the women were shamefully used as political pawns. The law which allowed this gross infringement of human rights, has recently been reintroduced in Greece.    Watch the film here

This entry was posted in Archive. Bookmark the permalink.