Doctors on Strike across Greece 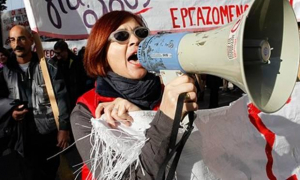 90% of doctors across Greece belonging to the national health agency EOPYY have been on strike since November 25th in protest at the decision of the Health Minister Adonis Georgiadis to suspend a large number of doctors as part of the austerity measures demanded by the Troika. The Minister aims to reform and cut primary health care. The Guardian Weekly reports on how this will impact on the most vulnerable in Greek society.

The doctors’ union POSEYP – EOPYY have called on the Minister to negotiate with them without preconditions and then they will call off their ongoing strike.

The cuts in spending implemented in 2010 in return for the joint EU-IMF bailout have already had shocking consequences.  Between 2008 and 2011, the number of stillborn babies increased by 21 per cent.

Doctors of the World have highlighted how 25% of Greeks can’t afford health care and how the level of child immunisations has been been falling. Jane Beach of Unite the Union (Health) detailed the impact of austerity measures on health in Greece in a recent speech to South East Regional TUC – here.