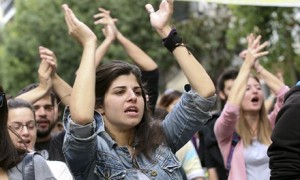 Many individuals in the UK, and unions with over 3 million members, are affiliated to the Greece Solidarity Campaign. We support all (non-fascist) parties and community campaigns opposing austerity in Greece.

This entry was posted in Archive, Updates. Bookmark the permalink.