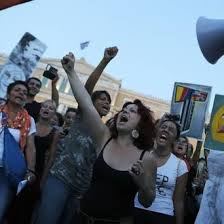 Athens, 29/01/2014     To EDUCATION INTERNATIONAL, ETUCE and Teacher Trade Unions across the world

Dear colleagues, As you have already been informed on 23 July 2013 the Greek government, within the framework of the memorandum with the troika (EU-ECB-IMF) placed 2,424 secondary teachers from 50 specialties in 8 month suspension abolishing at the same time 3 important sectors (healthcare, applied arts and aesthetics-hairstyling). We should point out that thousands of students are deprived of the specialties they had chosen to study. Also, thousands of 3rd grade Lyceum students are not being taught due to their teachers’ suspension. A number of teachers whose specialties were abolished, they have been transformed to administrative employees and others were prompted violently in premature retirement. Today 1,845 teachers are still suspended. After 7 months of fights and mobilizations there have been vacancy announcements for only 1,308 out of them. Most of them (925) will be placed in new posts in informal education, some of them (150) will be appointed in municipal nursery schools and others (233) will be transferred to teaching posts on the basis of a second Bachelor’s degree they already possess. Those transfers are under the threat of dismissals, without the teachers’ real consent as they wish to go back to the schools they had taught. More than 500 secondary teachers run the risk of being dismissed since their 8 month suspension expires on 22 March 2014. This means that all those not transferred to new posts will be dismissed. The government plans to dismiss those teachers implementing its commitment to troika demanding 11,400 dismissals in 2014. We keep up our fight so that no teacher is dismissed and all abolished sectors and specialties in the secondary Vocational education are reopened.

Once more, we are asking for your support in our fights.You are kindly requested to send similar letters to the Prime Minister, and the Ministers of Education and Administrative Reform in Greece as well as to the EU relevant authorities