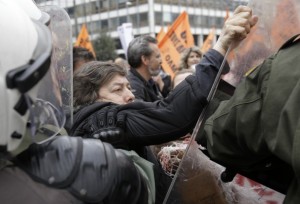 Teachers, school cleaners and other public servants in the teacher union OLME and public service union ADEDY were protesting against the sackings of their colleagues outside a meeting of the TROIKA and government on Friday 28th February 2014. The government responded with brutality, sending in the riot police to attack the demonstrators with tear gas and batons. Four of the demonstrators had such serious injuries that they had to be hospitalised, including the President of the local authority workers’ union. Eighteen protesters were arrested including the President of OLME, Themis Kotsifakis, who himself is one of the teachers facing dismissal. Another teacher who was arrested had his arm broken by police in the course of the arrest. As Kotsifakis declared, ‘They are the terrorists, not the people!’

The protests lasted seven hours, during which time the police continued to use tear gas. Meanwhile, in the meeting, the Troika pressed the government to draw up a new list of suspensions for 2014 and to expedite this year’s 12,500 public service dismissals, including 2500 teachers.

Please rush your messages of solidarity to olme@otenet.gr and  interolme@yahoo.gr

– See more at: http://www.teachersolidarity.com/blog/riot-police-attack-teachers-in-greece#sthash.cjihrLZk.dpuf  and see video footage of the police attack here