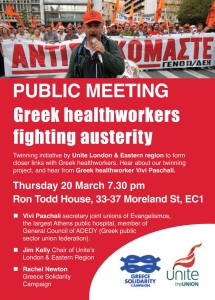 A fantastic opportunity to hear from Vivi Paschali, secretary of the joint unions at Evangelismos, the biggest Athens public hospital and member of the General Council of the public sector union ADEDY, who will speak at this meeting jointly organised by Unite the Union London and Eastern region and the Greece Solidarity Campaign. Other speakers  include Jim Kelly (Unite) and Rachel Newton (Greece Solidarity Campaign). The meeting is at Ron Todd House, 33-37 Moreland Street, EC1V 8BB ( nearest tube Angel) and starts at 7.30pm on Thursday 20 March 2014.