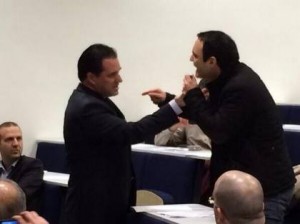 The Greek Health Minister Adonis Georgiadis, who had been invited to speak by the Hellenic Society of Imperial College, London, was confronted by an angry audience at the meeting on Sunday 16th March.

‘The government’s policies kill. Health Minister Mr Adonis Georgiadis, belongs to a political class that is pushing the Greek people further into despair, making sure our country can never exit the crisis.’             – Zoe Mavroudi, maker of the film ‘Ruins’, spoke eloquently at the meeting confronting the Minister with the facts of the health of Greek people under his policies. Watch her speaking here. The minister responded angrily to members of the audience ( photo). See   and read about this meeting here. The facts as Zoe Mavroudi stated them are:

‘Contrary to his – the Minister’s – propaganda, the actual evidence is shocking.

• Almost one third of the population is currently, or shall be in the near future, at risk of no access to social health insurance

• Cases of chronic malnutrition in school children have increased exponentially

• Compulsory fees have been introduced to access public services, including outpatients’ appointments and drug prescriptions

• Hospitals are severely understaffed with shortages in medication and basic supplies like toilet paper, catheters and syringes. Members of the public are expected to source and pay for these basic supplies

• There is a marked increase in incidence, prevalence and mortality of infectious diseases, including HIV and re-emergence of others such as malaria and TB

• Infant mortality has reversed and still births have increased