Greek Police are a Law unto Themselves – Amnesty International Reports 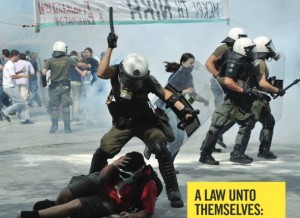 As Greece faces its sixth year of severe austerity policies, Amnesty International has published a report on how Greek police responses to the social tensions are continuing to flout international human rights law.

Amnesty International states: ‘ A series of police-implemented state policies and police raids at Roma settlements have led to a rise in human rights violations such as racial profiling and arbitrary detention. The abuses are taking place against a background of a steep increase of racially motivated attacks. Successive Greek governments have failed to acknowledge the scale and systematic nature of human rights violations by law enforcement officials and entrenched impunity.’  Read more and download the report here