May Day Protests and Strikes against Austerity, Unemployment and Fascism 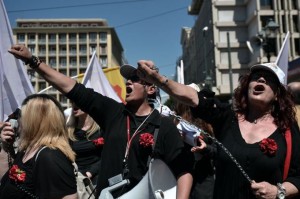 Massive demonstrations and strikes marking international workers’ day took place in Athens, Thessaloniki and Patras on May 1st. Thousands protested against the troika’s austerity policies, 27% unemployment and the threat of fascism.  Public and private sector unions took strike action in Athens – ADEDY and GSEE held a 24 hour strike. Railway workers were on strike and dock workers in Piraeus struck against privatisation. Ferry seamen across Greece held a 24 hours strike. Union leaders called for an immediate end to austerity.

“On this historic day of May 1st, Greek workers unite their voices with the workers all over the world who fight against poverty, injustices, social discrimination and racism. The size of the attack we have suffered from in our labor and insurance rights make us unite against the tough economic policies that destroyed everything we gained the last 100 years with fatigue and fights,” ADEDY stated in an official statement.

The government’s new Medium Term Plan for 2015 – 2018  was submitted to Parliament at the beginning of May- under it additional state revenues of 2 billion euros per year  have to be secured and more public spending reductions  are planned – 1.7 billion euros by 2018!

You can watch some of the demonstrations here: