Appeal from the Sit In of Women Cleaners fighting Unemployment. 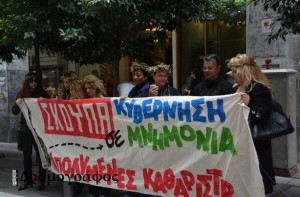 595 women cleaners employed by the Greek Finance Ministry have been striking and protesting for months to save their jobs. They now face the sack on May 18th as a direct result of the Troika’s demands  for cuts and privatisation. The women have issued this urgent appeal:

We are 595 women, who have been working for many years as janitors for the Ministry of Finance. Since 18 September 2013 we have been suspended from our work and on 18 May 2014 we will lose our jobs, we will be fired.

We are all women, and the gender discrimination is obvious. Most of us are over 50. We may never get a pension. Many of us are single-parents and the lives of our families depend on our salaries.

The memoranda of austerity policies have deprived us of the right to work and life. Today in Greece unemployment lies at 27% and for women it stands at 62.8%.

OUR HOPES FOR NEW JOBS DO NOT EXIST

WE ARE DEPRIVED OF ANY RIGHT TO HEALTH CARE

Until 2005 we were working on short-term basis contracts. After an EU directive and a fine, imposed on Greece, our contracts were turned into permanent ones.The Government claims that we are being fired in order to decrease the public deficit. The truth is that the Greek state pays far more to the private subcontractors, which replaced us, for cleaning services, compared with the cost of our work. For the Greek government and the Troika we are numbers and not human beings.

For 8 months now, since the 18th of September, we are protesting every day outside of the Ministry of Finance. We have gone through an immense struggle that has been dealt with with violence and repression by the Greek government.

They thought we would be an easy target and a weak link, because we belong to the lower strata of the working class and because we are women. But, together with the ordinary people, together with thousands of fired employees, we’ve been fighting everyday against the measures of the Greek government and the Troika that destroy our lives and lead us to absolute poverty.

We continue our struggle:

– by camping and permanent sit in from the 7 May 2014, outside the entrance of the Ministry of Finance, until our final vindication

– we demand our right to work, to social security, to pension with the full restoration of our jobs

– shoulder to shoulder with all the working people, we fight to overthrow those policies that impoverish us

– we demand the self-evident: to live with dignity through our humble profession.

We ask for your mobilisation and solidarity to our protest camp and sit in.

All together we can.

We urge you to send solidarity messages to the fighting janitors in: katharizoume@gmail.com

And most importantly to “bomb” with protest letters:

–  the Greek embassies of your country,

– the Greek Minister of Public Administration in info@kmitsotakis.gr and kyriakos@parliament.gr,

demanding the immediate stop of the suspension status and of the firing of the cleaners, asking their unconditional and full, for all, return to their jobs.