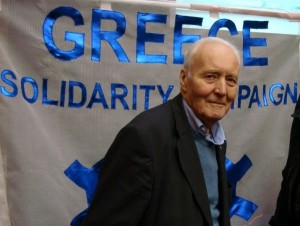 Tony Benn’s life graced post-war Europe during the century he lived. His thoughts and actions, inextricably connected until the end, inspired the struggles and embodied the hopes of every socialist, democrat and supporter of the left, for peace, democracy, social justice and change, during turbulent and rough times for his country and Europe as a whole. A great and sincere friend of the Greek people, Tony Benn stood by our side, without fail, whenever we really needed it. During the dictatorship, he played a leading role in the international isolation of the junta. More recently, in response to the financial crisis and the arrival of the troika, he organized a European campaign of solidarity with the Greek people, as chairman of the “Coalition of Resistance “. Tony Benn dedicated his life to serving people and to truly embodying the ideals of Socialism. He remains not just an emblematic figure to us in Greece, but to every Socialist and Leftist in Europe. His politics and policies remain a beacon of hope and a necessary point of reference as European Social-democracy faces a strategic dilemma: either remain on the Thatcher-inspired one-way street of Mrs Merkel – the way of austerity and fear – or to join with the European Left in the non-negotiable political priorities Tony Benn himself emphasized, namely democracy, dignity of labor, social justice and development. SYRIZA, public statement Tony Benn, an iconic figure of the British left, former UK cabinet minister and Labour MP for more than 50 years, passed away at age 88. Throughout his distinguished career, Mr. Benn worked tirelessly to promote peace and social justice across Europe and indeed, the globe. He was an ardent champion of union rights, nuclear disarmament and the peace movement, and an opponent of neoliberal economic policies and globalization. His vision for Europe was one based on common democratic values, worker’s rights and environmental protections.  Among his many notable achievements was the creation of the Coalition of Resistance (CoR) in 2010, whose aim was to oppose his government’s spending cuts and privatizations, in the wake of the economic downturn. He also supported similar citizens’ movements in Greece.  Mr. Benn’s solidarity with Greece was long-standing: he was the president of the Greece Solidarity Campaign, he maintained close ties with the Greek left, including SYRIZA and repeatedly called on Britain to the return the Elgin (Parthenon) Marbles to Greece.  Mr. Benn’s contributions to the Left will remain an important part of history. We offer our sincerest condolences to his family and many supporters.  See here

This entry was posted in Archive, News, Speeches. Bookmark the permalink.