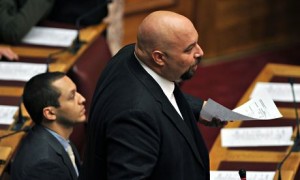 In a rare interview with a foreign media outlet before May’s European elections, the Golden Dawn MP Ilias Panagiotaros (pictured standing above) told the Australian current affairs show 60 Minutes the group was involved in an “extremely ugly [war]” and that “in every period of time, there must be, there are, some people who are doing the dirty work”.

When asked about Hitler, Panagiotaros, who is widely seen as the organisation’s chief overseas strategist, described him as a “great personality, like Stalin”.

With its leadership imprisoned and more than half of its 16-strong parliamentary group under criminal investigation, Golden Dawn has previously attempted to minimise any association with nazism. Fascist salutes among party cadres and the group’s swastika-style emblem have been played down. So, too, have video recordings, speeches and documents confiscated from the computers of its jailed elite that have depicted the force as headed by an all-powerful führer and a rigid hierarchy resonant of the Nazi party.

But Golden Dawn has clearly decided to up the ante as European elections and Greek local elections, also in May, approach. It was unclear, however, whether Panagiotaros’ inflammatory comments were indicative of the extremists’ renewed confidence or fear in the face of crisis.

Extolling the virtues of a “one-race nation”, Panagiotaros, who also faces charges of participating in a criminal gang, lashed out at the minorities the party considers deviant in the 60 Minutes interview, describing Muslim immigrants as jihadists and gays as “faggots”.

“Until 1997, [the] international association of doctors, and I don’t know what, considered homosexuality a sickness, illness, which it is.”

In October 2012, at the height of Greece’s economic and social crisis, Panagiotaros led a mob that prevented a Greek performance of Terence McNally’s Corpus Christi – in which Jesus is portrayed as a gay man – from being staged. Panagiotaros brushed off the incident, describing its director, Laertis Vasiliou, as “an Albanian faggot. A stupid idiot.”

Members of Greece’s gay community and dark-skinned immigrants have been singled out for attack by Golden Dawn hit squads. The paramilitary units roamed the streets with seeming impunity until a government crackdown against the group spurred by the murder last September of the Greek musician and anti-fascist activist Pavlos Fyssas.

Panagiotaros, Golden Dawn’s candidate for governor of the Attica region in the May local elections, vowed this week to release more videos detailing the group’s murky relations with other parties. Earlier this month, secretly filmed footage released by the neo-fascists showed the prime minister Antonis Samaras’ chief of staff telling Golden Dawn’s spokesman that a criminal investigation had been ordered against it out of a fear the party was stealing votes from the ruling conservatives. Golden Dawn, until recently Greece’s third biggest political force, has since seen a rebound in the polls.

It has also won the support of Voula Patoulidou, one of Greece’s greatest sporting legends. The women’s 100m hurdles gold medallist in the 1992 Barcelona Olympics described the ongoing criminal inquiry as politically motivated and based on lies.

This entry was posted in Archive, Fascism, News. Bookmark the permalink.