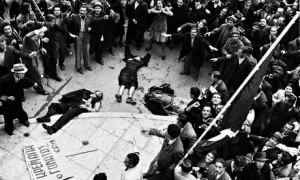 On December 3rd 1944,  28 people were shot dead and many others injured in the central Syntagma Square in Athens by the British… just days after Nazi Germany had been booted out of Greece by the Greek resistance allied to Britain. A few days later RAF planes were strafing parts of Athens with mortars raining down on civilians. This was the start of what became known in Greece as Dekemvriana. This dirty secret has been exposed by Helena Smith and Ed Vulliamy in the Observer (30.11.2014). They explain how Churchill’s shameful decision to turn on the partisans who fought on Britain’s side in the war sowed the seeds for the rise of the extreme right in Greece today.

“The 1944 December uprising and 1946-49 civil war period infuses the present,” says the leading historian of these events, André Gerolymatos, “because there has never been a reconciliation. In France or Italy, if you fought the Nazis, you were respected in society after the war, regardless of ideology. In Greece, you found yourself fighting – or imprisoned and tortured by – the people who had collaborated with the Nazis, on British orders. There has never been a reckoning with that crime, and much of what is happening in Greece now is the result of not coming to terms with the past.”

Gerolymatos writes in his forthcoming book, The International Civil War, about how “in the middle of November, the British started releasing Security Battalion officers (units which had collaborated with the Nazis and been integrated into the SS)… and soon some of them were freely walking the streets of Athens wearing new uniforms… The British army continued to provide protection to assist the gradual rehabilitation of the former quisling units in the Greek army and police forces.” An SOE memo urged that “HMG must not appear to be connected with this scheme.”

“Senior British officers knew exactly what they were doing, despite the fact that the ordinary soldiers of the former Security Battalions were the scum of Greece”. Gerolymatos estimates that 12,000 Security Battalionists were released from Goudi prison during the uprising to join the National Guard, and 228 had been reinstated in the army.”