Remembering the 24 victims of the Athens Polytechnic Uprising17th November 1973 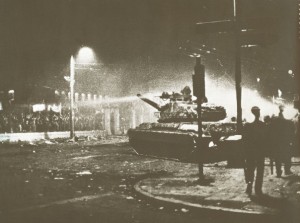 On 17th November 1973 – 24 people were killed in the Athens Polytechnic Uprising, a massive demonstration of the popular rejection of the Greek military dictatorship (1967 -1974). The names and details of the 24 who died can be seen here.   These details were not widely publicised, but thanks to research published in 2003 and translated into English in 2012 by A Gael in Greece , we can remember these 24 victims killed when the ruling junta sent in their tanks to crush the student revolt.