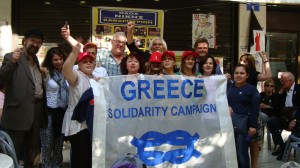 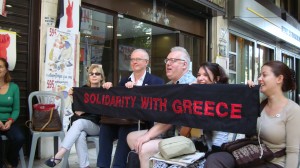 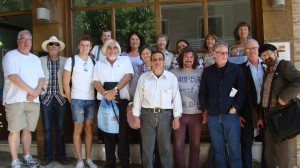 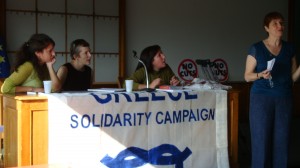 The delegation visited a ‘Without Middleman Market’, the biggest hospital in Athens-Evangelismos, a Social Solidarity Centre supporting local families and a Social Solidarity Clinic providing free health care to the thousands with no health cover. The delegation had meetings with the sacked women cleaners camped outside the Finance Ministry for over a year ( see pictures above), the all  Athens Committee of Social Solidarity Centres, Evangelismos hospital doctors, nurses and union convenor (see picture above), the public sector union ADEDY,  the volunteer staff of Peristeri social solidarity clinic and the network Solidarity for All. We also met anti-austerity politicians – Syriza Leader Alexis Tsipras and Syriza MPs in Parliament and the recently elected regional governor and deputy governor of greater Athens – Attika.

‘‘On the one hand, we were shocked and appalled at the hardship and the hunger among ordinary people, and the diabolical conditions in the big central hospital now all primary care has been closed down. On the other, we were moved and inspired by the determined resistance to austerity measures, the  impressively organised social solidarity initiatives and the programme of the anti austerity radical left Syriza MPs and Leader Alexis Tsipras who lead in the polls.’

See Manuel Cortes’s letter to all member of his union TSSA after the delegation visit here.  A full report is being compiled and will be published shortly.