GREECE SOLIDARITY CAMPAIGN STATEMENT ON THE GREEK ELECTIONS. STAND WITH THE PEOPLE OF GREECE! 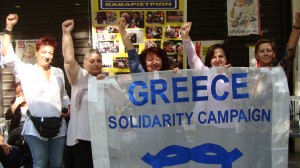 Greece stands on the brink of momentous change. The forthcoming general election presents huge, transformative opportunities to the people of Greece – and to Europe more widely. The anti-austerity party SYRIZA – and the movement and people as a whole – has a strong chance of victory.

If this happens, a new government will be formed which will place the defence of the people at the heart of its programme.

This will be a government that will no longer let Greece be subjected to the rule of the Troika. It will be a Government that is transparent and democratic, a clear break from the corrupt elite who created the debt crisis for their own profit and then on behalf of the Troika forced on the Greek people the most extreme policies of austerity in Europe.

After many years of struggle the people may well place their confidence in the radical left and vote for a party that promises hope and not defeat. If they do, instead of austerity the new government will feed and clothe and house and create jobs. It will reject the debt. If they take this step, the Greek people will have started to turn the tide against austerity not just in Greece but throughout Europe as a whole. Such a historic vote would advance the common interests of all the working peoples of Europe. A new Greek government on this basis will face enormous difficulties. The financial and political elites across Europe would suffer a major blow and would immediately plot to take their revenge. They would try to force the new government by economic and political blackmail to return to the path of austerity. We have no doubt that the new government will face these difficulties with courage and determination. We have confidence that it will withstand this pressure.   But Greece must not be left to struggle alone. It needs solidarity to defend its democracy and its people. We pledge our support for the people of Greece in their struggle. Their struggle is our struggle and we are indivisible. Were this government to be brought down it would be a defeat for us all. We call on all progressive forces across Europe to mobilise to defend democracy in Greece.

Defend the democratic choice of the people of Greece!  No to austerity! No to neo-liberal Europe!