Welcoming ‘anti-austerity party’ for Merkel at the British Museum 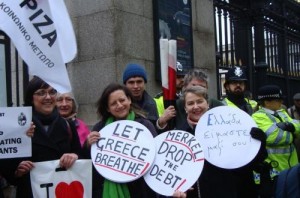 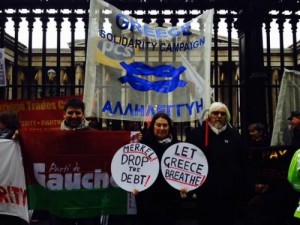 German Chancellor Angela Merkell was met with cries of ‘Drop the Debt’ and  ‘We don’t want no Memoranda’ in a protest organised by the Greece Solidarity Campaign outside the British Museum on Wednesday January 7th.

As Greeks prepare to go to the polls on 25 January, expectations are that the radical left Syriza will unseat the ruling pro-austerity New Democracy government. Greek people have suffered under the heavy yoke of the Troika (IMF, European Central Bank & EU)  imposed loan bail-out conditions which have seen youth jobless numbers rocket to 60%, pensions and wages cut by more than 25%, and huge reductions in public services, particularly health.

Angela Merkell oversees the neoliberal austerity agenda responsible for inflicting these harsh measures on Greek people, said Paul Mackney, chair of the Greece Solidarity Campaign. Protesters demanded an end to the crippling debt payments which have led to huge suffering for working people and done nothing to reboot the Greek economy.

‘The protest is not against the German people but aimed to highlight the damaging effects of austerity policies for all European working people’. In the event of a Syriza victory in Greece Mackney said the ‘tide could begin to turn against this disastrous neo-liberal policy and lead to a domino effect across Europe with other countries beginning to reject austerity’. ‘Working people in Greece, Europe or the UK did not create the economic crisis, it should be the bankers and rich corporations who pay for the consequences.’

The Greece Solidarity Campaign will be organising a public briefing with speakers from Syriza and the British trade union and labour movement on Monday 12 January 6.30 at the UNITE the union, Holborn, 128 Theobalds Road, London WC1X 8TN

Other events are planned in the run-up to the Greek elections.  For more information check Greece Solidarity on Facebook or  www.greecesolidarity.org