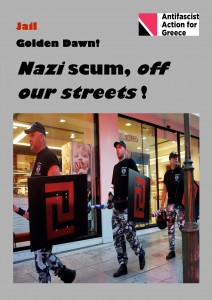 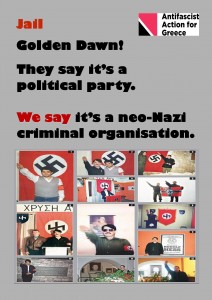 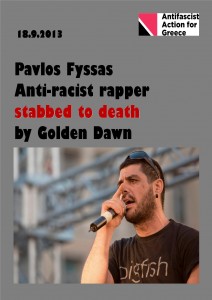 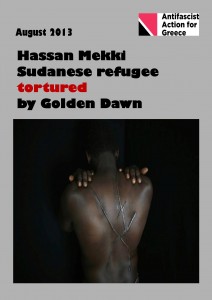 On Monday April 20th in Athens the most important trial of fascist criminality since Nuremberg starts.

The  article  below explains its significance. In London on Sunday April 19th there will a Jail Golden Dawn rally in Trafalgar Square 3pm.

The Time Has Come to Halt Fascist Barbarism.

‘Not since Nuremberg has Europe seen a trial of fascists on such a scale. They stand accused of terrible crimes – including murder and in the dock of Korydallos prison will be 69 members of Greek neonazi party Golden Dawn, including all 17 of its MPs.

Arraigned before the specially constructed court in the grounds of the Korydallos prison, south of Athens, will be 69 members of the Greek neonazi party Golden Dawn, including all 17 of its MPs. The fascists managed to take third place in the general election in January.

Thousands of anti-fascist protesters are set to gather in the area — and more across Greece — on Monday morning in a united show of opposition to fascism, racism and the threat posed by authoritarian elements of the Greek state.

The municipal council in the area is closing all schools and workplaces on the day. The mayor and councillors will join a broad spectrum of MPs, trade unions, immigrant groups and civil society organisations under the umbrella of the anti-fascist movement to march and rally outside the opening of the proceedings.

The public sector union federation ADEDY has called a four-hour strike for the morning so that its members can take part.

Underscoring the sense of unity, the message from two widely covered media conferences this week — one by the KEERFA anti-fascist and anti-racist movement, the other by the powerful Communist Party of Greece (KKE) — was identical: Golden Dawn is a violent criminal organisation masquerading as a political party. The prosecution must be supported. Not a millimetre must be yielded to the fascists’ attempts to relegitimise themselves in Greek public life and present themselves as some kind of anti-Establishment outsiders.

The senior governing party Syriza will hold a public meeting on Tuesday along the same lines with the party’s chief whip Nikos Filis.

It is popular outrage at the fascists, which erupted in September 2013 following the murder of anti-racist rapper Pavlos Fyssas, which is driving the whole process.

While it is the state which has brought the prosecution, it did not do so of its own volition. Just months before Fyssas’s murder the public order minister of the then Antonis Samaras-led government threatened to sue veteran foreign correspondent of the Guardian Helena Smith because she reported how anti-capitalist protesters had been beaten in police cells by officers sympathetic to Golden Dawn.

The murder by Golden Dawn supporters of Pakistani retail worker Shehzad Luqman in January of that year brought thousands onto the streets of Athens, but inertia from a government whose chef de cabinet was in private discussions with the fascist parliamentary group about their inclusion in a possible realignment of political forces on the right.

It was the tens of thousands who took to the streets in September who forced an abrupt about face on the part of the government and the state prosecuting authorities.

Despite the welcome change in government this January, the forces of the radical left and of the anti-racist movement have not forgotten that lesson.

They have skilfully utilised Greek legal procedure so that lawyers of the left and of the movement representing the victims of the fascists’ crimes will be co-plaintiffs in the trial. They will be able to call witnesses, cross-examine and lead evidence. They are also entitled to full disclosure.

Already that means that they have accessed tens of thousands of pages of evidence. The legal intervention by anti-fascist forces is more than a belt and braces approach to avoid a recent botch job by state prosecutors which allowed leading Golden Dawn thug Ilias Kasidiaris to walk free from charges arising from his televised assault three years ago on two women MPs — Liana Kanelli of the Communist Party and Rena Dourou of Syriza.

For on trial also will be the elements within the Greek state and oligarchic employers who have for decades supported Golden Dawn and its predecessors, granting it a sense of virtual immunity.

The previous government carefully set the cut-off date for investigating the fascists’ crimes as 2008. But Golden Dawn has been around since 1986. Its origins lie in the paramilitary Greek right going all the way back through the years of the military dictatorship of 1967-74, the Western-backed war against the Communist Party and the left in the 1940s to the collaborators with the nazi occupation of Greece, which was more brutal than anywhere in Europe outside of Poland and the Soviet Union.

Bringing to the light of day the dark recesses of the Greek deep state is not, as the parliamentary right claim, some vengeful settling of scores from the distant past. (Though why there should be a political statute of limitation on fascist crimes is a question they should be made to answer.) It is a matter of contemporary self-defence.

In the second general election of May 2012 analysis of the polling stations where the police, army officers and similar state personnel vote revealed that possibly 50 percent of the Athenian police force voted for the fascists.

As the jaws of the European Union and troika creditors close in on the government in Athens — and as it vacillates in response — the right is looking to make a comeback. The trial of Golden Dawn and the mass movement which took to the streets to mark UN anti-racism day last month provides a barrier both to the resurgence of the fascists and to the mainstream right renewing its previous flirtation with them.

That leaves the right with a time-honoured authoritarian law and order push. Whether over prison reform, policing or moves to end the inhuman conditions facing many immigrants into Greece, the elected right is seeking collaborators within the deep state and among dubious elements on the government’s side to undermine liberal reforms and to build a front against the government from the right.

Liberal elements of the centre have disgracefully succumbed to this authoritarian push. The parties of the centre left — Pasok and To Potami — this week voted against a Bill liberalising Greece’s cruel prison system.

And some liberal voices have raised the canard that the prosecution of Golden Dawn is in some way a violation of free speech.

But the prosecution has nothing to do with what Golden Dawn thinks or writes. It has to do with its actions, with the crimes it has committed — including murder.

Three major criminal cases are themselves a core part of the wider proceedings. They are the murder of Pavlos Fyssas, the near fatal attack on a group of Egyptian fishermen in the Perama area of Piraeus, the port of Athens, and a similarly ferocious attack in the same area on Communist-organised trade unionists of the PAME inter-union front.

In addition to reaching verdicts on these three crimes, the court will hear evidence about others where there have already been convictions. The prosecution will then seek to show that all of these crimes, committed by Golden Dawn members, are not incidental to their perpetrators’ membership of the organisation, but in fact flow from it.

The gist of the fascists’ defence is that the organisation cannot be held responsible for the criminal activity of its members. But Golden Dawn (GD) is not a chess club, where it would be unreasonable to hold the secretary responsible for the driving offences of one of its players.

The anti-fascist case is that the actual organisation of GD, its core around which all the trappings of a political party are merely a carapace, is a hierarchical, violent gang with a command structure organised on the national-socialist fuehrerprinzip — ie strongman rule from top to bottom.

Under the impetus of the mass movement the media have already publicised pieces of evidence showing that taking an oath containing this and other nazi doctrine is a required part of becoming a GD member.

The primary function in any branch or higher organisation of GD — all the way up to the fuehrer Nikolaos Michalokiakos — is the organisation of “security battalions.” That comes first and has precedence over the treasurer, secretary, press officer and all the other roles which normal parties or trade unions regard as the central officer functions.

Security battalions was the name given to the mass collaborationist force under Hitler’s occupation of Greece which rounded up partisans, Jews and others to be murdered.

There has never been a proper reckoning of the Establishment’s complicity in those crimes, the atrocities of the civil war, the murder of socialists such as MP Grigoris Lambrakis in 1963 (subject of Costa Gavras’s film Z), the junta and the “strategy of tension” violence against the left in the 1970s.

It is in this enforced historical amnesia that Golden Dawn has been allowed for 25 years to burrow silently until the circumstances of economic collapse and complicit, authoritarian, institutionally racist Establishment politicians allowed it to grow out of despair.

Not as principals, but as secondary aiders and abetters, stand the EU and troika bureaucracies in the political scope of this trial.

For it was their contempt for democracy which forced the imposition of Greece’s first unelected prime minster since the junta back in 2012. The government of central banker Lucas Papademos included the far-right LAOS party.

One of its MPs — now a poster boy for the right-wing New Democracy — was Makis Voridis.

He is a veteran fascist who sharpened his axe, literally, in physical assaults on left-wing students in the 1980s and before that was a leader of the Free Pupils school students organisation of the far right which terrorised left-wing teachers and pupils.

This trial will last a year. The Greek anti-fascist movement and its lawyers deserve the support of the labour movement and of the left across Europe.

As we approach the 70th anniversary of VE Day, crisis-wracked Greece is a reminder that democracy, liberal values and halting fascist barbarism are all far too important to be left in the hands of the capitalist Establishment and the politicians who serve it.’

This entry was posted in Archive, Events, Fascism, News. Bookmark the permalink.