European mobilisation to support the people of Greece! United we stand against austerity and social injustice. 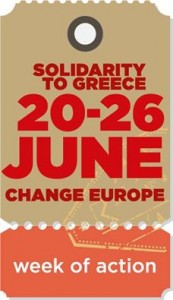 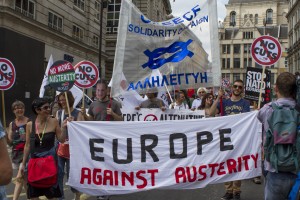 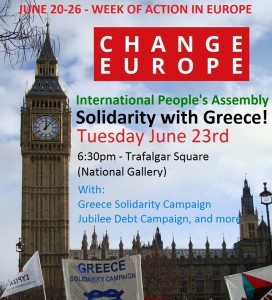 An urgent Call for Support and Solidarity with Greece has been made by hundreds of leading members of trade union, professional associations, community activist networks, pensioners groups, ecologist organisations, migrant and refugee groups, social solidarity networks and public personalities. The purpose of the Call is to mobilise people across Europe against the pro-austerity forces and the EU institutions and in solidarity with those who fight for social justice and democracy

Read the Call and its first wave of signatures below. Please share it and organise/join solidarity actions. Follow further developments here

‘The outcome of the ongoing battle against austerity will define the future not only of the Greeks but also the future of the European people who struggle for more democracy and equality. During the previous governments, Greece used to be a guinea pig but now is a positive example which some forces want to smash.

Therefore, there is a need for building a militant European social and political front against the pressure of the EU institutions, leading to the suffocation of the Greek society, and to the restart of the austerity programmes implemented already for 4 years by the previous governments with catastrophic results. The Greek people, by their mandate of the 25th of January, condemned the austerity policies, as well as the anti-labour laws and the privatization programmes. The policies supported by SYRIZA have adopted the demands of the trade union and social movements of Europe for the last 10 years, and now we need the support of these movements in order to repel these pressures and to proceed with the progressive programme of social justice. The European Establishment needs to punish the counter-paradigm of social justice and democracy defended by the representatives of Greek people, because they’re afraid of it: Do not let them do it!

In the period from now till the upcoming June, negotiations are taking place among the Greek Government and the European Institutions. The economic elite find it difficult to accept that someone challenges their policies and propose an alternative plan for economy. They are using all means to blackmail the Greek people and its Government. Show us we are not alone in this fight!

We must put pressure on these institutions to cease this unacceptable behavior and make them accept that it is the citizens of Europe who must decide for their future. Based on the recent decisions of the Athens meeting on the 2nd of May, we, a broad coalition of social organizations, unions and networks, intellectuals, artists, migrant organizations and various left, green and progressive political powers being active in Greece, propose international actions between the 20 and the 26th of June in order to create the positive social and political environment that will support the Greek struggle. Moreover we are willing to host an event here in Athens on the 27th to share ours and yours experiences of mobilizations and solidarity. It is significant to transform the European peoples from passive viewers to active players of this story.

This event will provide the necessary space to these actors in order to express their concern regarding the negotiations but mainly to bring to the surface the necessity of counterweighting the systemic pressures against the Greek Government’s demands against austerity and for social justice. It is of the outmost importance the necessity to send a clear political message. The Greek society doesn’t stand alone. We need to demonstrate that all of us are decided to support all the long time demands of the movement, which the Greek people by voting a left government to support them, decided to break the neoliberal consensus. Solidarity and massive popular support will give the best to a clash among our side and the European political and economic elite.

Let’s fight for a Europe of dignity and solidarity and against a Europe of profit, a Europe Fortress. We call all the social and political forces to be part of the week of solidarity and to build strong national coalitions backing the European struggle against austerity.’   Signed by:

Trachanatzis  Stathis  : General  Secretary of Athens Labour  Unios Organization & Member of the Board of the General Confederation of Greek Workers

Capella Kazatza Dimitrios — An. Board Member GENOP / PPC, Member of the Labour Centre of Trikala

Apollonatos  Memangelos Board member of the Association of Hospital Workers IASO

Boutsinas Stavros Board member of Bank of Piraeus Workers Association

Taliakos  Dimitris,  Board of Association  of Employees Bank  Piraeus    ‘

Bellios  Fotis,, Board of Association  of Employees  Bank  Piraeus

George Petropoulos Member of the Executive Committee of ADEDY

Kalomoiris Gregory Member of the Executive Committee of ADEDY Mercia

NETWORK OF IMMIGRANTS AND POLITICAL REFUGEES

OPEN CITY (PLATFORM FOR THE MUNICIPALITY OF ATHENS)

INICIATIVE FOR THE RIGHT’S OF PRISONERS

OBSERVATORY OF INTERNATIONAL ORGANISATIONS AND GLOBALISATION

ALBANIS YANNIS : member of the Organizing Committee of the ESF Athens

GEORGOULAS STRATOS :   Assistant Professor of the University of Aegean and member of the Council of the Municipality of island Lesvos.

GIANNOPOULOS NIKOS : member of the Organizing Committee of the ESF Athens

TRIGAZIS PANOS: PRESIDENT OF THE OBSERVATORY OF INTERNATIONAL ORGANISATIONS AND GLOBALISATION