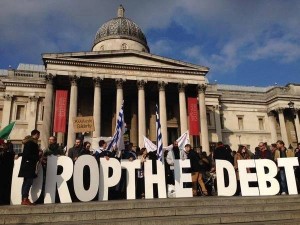 On Sunday 22nd May the Greek Parliament will vote on whether to agree to more tax rises and more, contingency, austerity measures – all demanded by the Troika of International Monetary Fund (IMF), European Central Bank(ECB) and European Commission in return for the long delayed bailout funds. Under the bill VAT would rise by another 1 per cent to 24 per cent and the sale of banks’ non performing loans (unpaid mortgages) would be eased ( ie  leading to evictions). The bill will also include new, severe contingency measures imposing more austerity if Greece should miss the fiscal targets set for the economy by the Troika in future.  The Troika demand that the bill be passed before the meeting of the Eurozone finance ministers on Tuesday May 24th, They will complete the ‘review’ of Greece’s ‘reforms’ and may then approve the release of the next bail out tranche – which is needed for Greece to pay back IMF loans, state arrears and ECB bonds due in July. 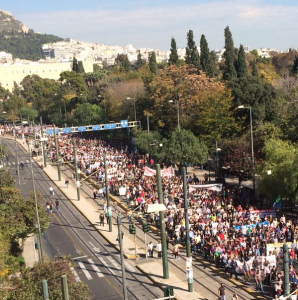 The talks between the lenders and Greece have dragged on for months as more austerity measures have been demanded. The Greek people have continued to protest against the vicious cuts in pensions and big tax hikes. In April public sector workers struck against pension cuts and tax rises and in May a 48 hour public and private sector strike and 4 day seamen’s strike paralysed the country.

A cancelling of Greece’s burden of debt or substantial debt relief measures are needed.  Greece’s debt now is 180% of GDP and rising. The IMF ,the European lenders and Greek government cannot agree on how this should happen.  See latest reports here   and of the IMF here . The Jubilee Debt Campaign has shown the irrational madness of austerity policies which lead to debt spiralling out of control. Read ‘The Never Ending Austerity Story. Why Greece’s Third Bailout Changes Nothing’