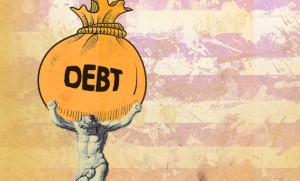 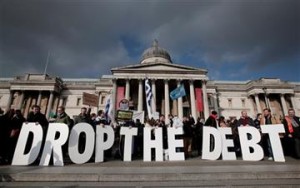 Article by Michael Roberts published on his blog October 2017

The announcement by the European Central Bank that it has so far made €7.8bn in profits from its holdings in Greek government debt reveals the true nature of the so-called bailouts of Greek government finances that the EU leaders organised in return for massive austerity measures from 2012 onwards.

Back in March 2012, five years ago, a so-called private sector involvement (PSI) deal was agreed under which French, German and Greek banks who held the bulk of Greek government bonds agreed to take a ‘haircut’ on the value of their bond holdings.  Under the PSI, they received in return new Greek government bonds with 30-year lives, paying about 3-4% a year in interest and guaranteed by the Eurozone financing operation, the EFSF.  And they also got some cash upfront for turning in their old bonds.  The Euro leaders and the IMF provided around €130bn in new money plus €34bn left over from the previous Greek package to fund the interest to be paid on the new Greek government bonds, repayments to the IMF, money to recapitalise the Greek banks and money for the cash on the PSI deal. 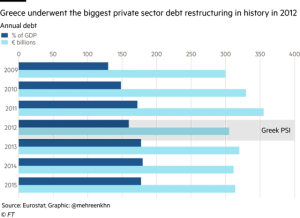 As part of the PSI, the ECB bought up some of these bonds, for which they were guaranteed repayment as they matured by the Greek government, as part of the bailout packages that ensued.  In total, the ECB and national central banks bought €56.2 billion of Greek debt, according to analysis by a University of Munich academic. Of this, €29 billion has been repaid, with €27 billion still outstanding.  The ECB bought bonds to be repaid up until 2028.

Well, not only have these bond purchases been repaid over the ensuing years as the Greek people took the pain of wage and pension cuts, a collapse in public services and the privatisation of public assets, but the ECB has made nearly €8bn in profits. The ECB said holdings of Greek sovereign bonds acquired under its Securities and Markets bond-buying programme (SMP) had resulted in €7.8bn of net income interest between 2012-2016. These profits are not being returned to the Greeks but distributed among the 19-country central banks in the eurozone.

Another cruel irony is that, having purchased these bonds from the French and German banks so the banks’ losses were minimised, the ECB has since refused to buy Greek government bonds as part of its quantitative easing programme to help the Greeks.  Why? Because the Greek government debt is not sustainable!

And that is certainly true.  When imposing the PSI on Greece, the Troika (ECB, EU, and IMF) aimed for Greece to get its public debt burden down from 166% of GDP before the debt default to 120% of GDP by the end of the decade through the austerity measures.  But it would not do this by writing off any Greek debt but only by squeezing the Greek people dry to pay back the ECB and the IMF for their ‘bailout’ loans.  Of the total €164bn funding in 2012, only €23bn went towards financing the Greek government’s budget.

So one hand gaveth and the other took it away.

Because the Greek economy imploded, Greek government debt, far from falling under the three bailout programmes, just rocketed further up to a peak of 180% of GDP.  Austerity did not work and still is not working to reduce the debt and stop the unending interest payments to private bondholders as well as the ECB. 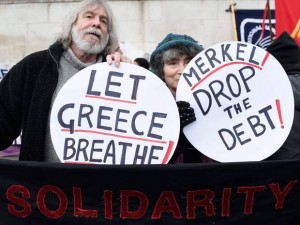 It’s probable that the IMF and the ECB have made more profits from the ‘bailout’ loans.  An analysis from the Jubilee Debt Campaign in 2015 estimated the IMF had made €2.5bn in profits from its loans by then.  And the IMF and the ECB will make even more profits from the ‘bailout’ loans.  The JDC reckons that, based on the difference between the average effective interest rate the ECB has received on the debt of around 10%, the maturity of the debt, and the normal negligible cost of borrowing from the ECB, the accrued profit could be €22 billion in 2022, ten years since the PSI.

The IMF reckons that, without debt relief, Greece’s public sector debt to GDP ratio will not fall even with further austerity. Indeed, it would rise from around 180% now to nearly 300% by 2060 – in a ‘snowball’ effect where debt is repaid with more debt and interest payments keep rising on top.

This entry was posted in Archive, Comment, News, Updates. Bookmark the permalink.