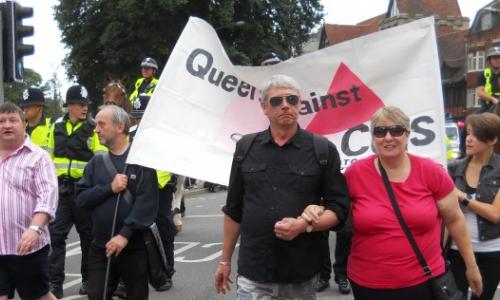 QUAC (Queers Against the Cuts) is a diverse group of LGBTQ people dedicated to opposing vicious austerity measures. The cuts to public services, the voluntary sector, job losses and attacks on welfare disproportionately affect the LGBTQ community with all the consequences of hardship and poverty this will bring. Young people, older and disabled people, trans people, LGBTQ organisations and those living with HIV/AIDS will all be affected by these savage cuts. We do not believe that austerity is the answer and LGBTQ people should not be made to pay for catastrophic mistakes made by bankers, speculators and their government supporters. We also show our solidarity with other groups and people struggling against austerity.
Austerity is not the answer.
No more so is this apparent than in Greece where the economy is in disarray and getting worse. The destruction of decent living standards, impoverishment and failure to invest in resources has led to resentment and a breeding ground for fascist and far right organisations. This has led to a steep rise in racism, xenophobia and sexual prejudice in Greece and foreshadowed what is now happening in the rest of Europe. The Golden Dawn Party is openly anti-semitic and involved in attacks on immigrants, the muslim community and LGBTQ people. Golden Dawn is renowned for infiltrating the police and attacks on other MPs. One of their MP’s war cry recently regarding LGBTQ people was the threat that ‘Your time will come.’
We stand with the Greek people in their darkest hour against the vicious attacks on their lives, the destruction of democracy and the most serious threat of fascism anywhere in Europe in our lifetime.
Programme of events:
1. Readings from Christopher Isherwood’s Berlin novels of the 1930s – David Sharkey.
2. ‘What is Happening in Greece’ – Stathis Kouvlakis, Syriza (Greek political opposition).
3. ‘How LGTBQ people can oppose fascism and homophobia’ – Rachel Newton (Queers Against the Cuts)
4. Musical entertainment – Denis Fernando
5. LGBTQ life in Weimar Germany – Colin Wilson.
A cabaret song from Weimar Germany. This is considered to be one of the first gay anthems. Composed in 1920 by Kurt Schwabach and Mischa Spoliansky for Magnus Hirschfeld’s Institute for Sexual Science.
The Lavender Song (Das Lila Lied)
“What makes them think they have the right
to say what God considers viceWhat makes them think they have the right
to keep us out of Paradise
They make our lives hell here on Earth
poisoning us with guilt and shame
If we resist prison awaits
so our love dares not speak its name
The crime is when love must hide
from now on we’ll love with pride
We’re not afraid to be queer and diff’rent
If that means hell – well hell we’ll take the chance
They’re all so straight uptight upright and rigid
they march in lockstep we prefer to dance
We see a world of romance and pleasure
all they can see is sheer banality
Lavender nights are out greatest treasure
where we can be just who we want to be
Round us all up, send us all away
that’s what you’d really like to do
But we’re too strong proud unafraid
in fact we almost pity you
You act from fear, why should that be
what is it that you are frightened of
the way that we dress
the way that we meet
the fact that you cannot destroy our love
We’re going to win our rights
to lavender days and nights
We’re not afraid to be queer, etc.”
Contacts:
07951 755 785
queersagainstthecuts@gmail.com
http://queersagainstthecuts.wordpress.com

This entry was posted in Archive, Events, Fascism. Bookmark the permalink.