The South East Regional TUC LGBT network and the UNITE London & Eastern Region LGBT Committee organised an event to celebrate LGBT History month on February 4 against austerity and focused on the contribution that LGBT migrants from countries such as Greece, Spain, Portugal Italy and Ireland make to the community here. Together with an amazing exhibition of photographs the event was addressed by Jim Kelly from UNITE and Rachel Newton from the Greece Solidarity Campaign. This is Rachel’s contribution:

I’m really delighted to be invited here to speak on behalf of the Greece Solidarity Campaign as part of LGBT History Month, and I’d like to congratulate the organisers, and the artist for this amazing exhibition.

The aims of the Greece Solidarity campaign are to offer political and practical solidarity to people opposing austerity in Greece. I was lucky to be part of a trade union solidarity delegation back in March last year that led to the campaign being launched. Over the course of 3 days and 18 meetings we met with anti austerity politicians, activists, pensioners groups, town hall leaders in Athens. 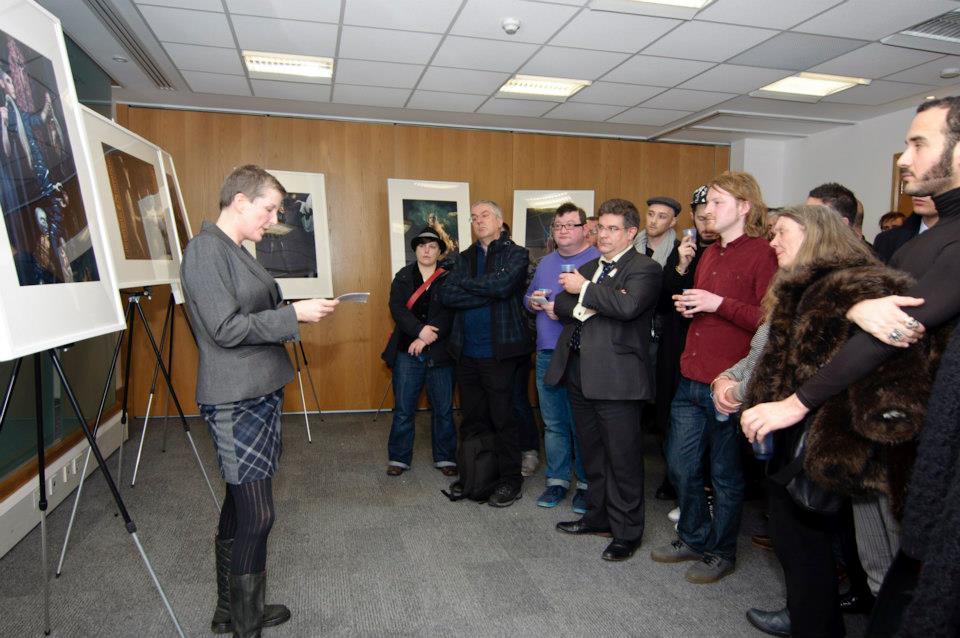 The visit took place when the 2nd memoranda had just been agreed – this is as I’m sure people here will know, the agreement imposed by the EU, World Bank, IMF – the so called Troika – that demanded savage cuts, privatization and sale of Greece’s assets in return for the loan to prevent bankruptcy. The first memoranda has been imposed 2 years earlier, and as a result pensions had been cut by 50%, wages by between 25 and 40%, half of all young people unemployed, basic infrastructure starting to collapse – fire officers union told us about their members dying due to using ancient equipment that isn’t being replaced, hospitals being closed down, a massive rise in homelessness and suicides, agreements with unions torn up, rights of people in work eroded – e.g. the law had just changed so it would now go back to being lawful to sack a woman when she became pregnant. Since then of course the crisis has deepened – rise in diseases – HIV among them, also childhood diseases as people are no longer able to get their children vaccinated, schools spent the first half of this winter with no heating until massive pressure forced the Government to provide fuel, hospitals have run out of cancer drugs.

The visit in March was also just before the election that saw the continued collapse of the mainstream parties, with a growing coalition of the radical left under SYRIZA almost winning, with ND and PASOK just managing to keep hold of power in only the most fragile of coalition, and with no mandate for austerity.

One of the things we heard from each person we met on that delegation is – this is your fight too. What the visit brought home to me is how concrete this is, not an abstract slogan. When Cameron recently did his speech about Europe, raising the question of a referenda, he quoted Angela Merkel when she explicitly said that either Europe’s production has to increase or its social spending reduced and preferably both, so basically more work for less wages, and less on education, health spending, pensions, welfare per person. She said that this was needed to ‘protect the European standard of living’ – what is clear is that the exact opposite is intended for 99% of us – it is this standard, and every social gain we have won, that Merkel, echoed here by Cameron, has declared war on.

And Greece shows all of Europe and the world that there is a political will to carry out this programme with ruthless force. We are used to talking about the impact of globalization being the ‘race for the bottom’.  Of course for many workers in Europe they are already forced to exist at this bottom – e.g. Turkish guest workers in Germany, Chinese and Nigerian workers in the UK, North Africans in France, Albanians and Roma in Italy – working often below minimum wage and with no social rights. Merkels proposition for Europe – supported entirely by Cameron – is for a wholesale restructuring that starts to make this the standard for workers across western Europe. The UK austerity programme is part of this drive, as it is in Ireland, Portugal, Italy, Spain. And the mass movement opposing austerity in Greece are in the front line against it.

There is a live – sometimes polarizing – debate going on within the left in Greece about how far indigenous ruling elites and institutions are responsible for Greece’s catastrophe vs the austerity policy of international capitalist organisations, whose main home address is the Chancellory in Berlin.

And I can see why Greek activists would want to make sure their own rulers are not let off the hook while the movement focuses on the Troika. The Greek elite would give those running the City of London a run for their money if they were in a competition for being reactionary, parasitical, and criminally corrupt – just look at the Greek shipping magnates. And while the Troika may be imposing the memoranda, it is the Greek government who orders the Greek riot police to smash up opposition, and the Greek colonels who hover in the wings.

But the imposition of the austerity memoranda in Greece by the Troika is an attack on democracy and national sovereignty. The 2nd memoranda explicitly tries to forbid any Greek government to borrow money to service the debts from anywhere else – which can only be understood as an attempt to tie the hands of a new anti austerity government coming to power. And there is a danger that focusing on the homegrown wreckers of the Greek economy, rather than their colleagues in the Troika, could strengthen the false notion that this is a Greece specific situation – tying into the loads of rubbish in the Greek, British and German media about how Greece is so unusually corrupt, so unusually indebted etc etc.

The reality is that the interests of the Greek tycoons and corrupt politicians cannot be separated from those of the Troika. The Greek debt is the result of loans from the EU Central Bank to the Greek Government arranged by the City of London, in particular the City branch of Goldman Sachs. Lucus Papadamos, the unelected PM of Greece in 2011-12 in charge of forcing through the first EU austerity memoranda, was previously the vice chair and managing director of Goldman Sachs in the 1990s, at exactly the time when they were helping the Greek Government paint a false picture of Greek finances in order to gain entry to the EU and get their hands on. The same man went onto become the Governor of the Bank of Greece, later bailed out by the Greek people, and then the vice president of the European Central Bank who lent the money in the first place. You couldn’t make it up. But the Greek elite are not unusual in this at all  –– look at Mario Monti, in Italy, Peter Sutherland in Ireland, and we could seriously go on and on with that list through Europe.

And this is why the fight the Greek people are leading is all our fight. Cameron’s agenda is the same as Merkels. In Greece, what stands in the way of progress, a hope for a more productive and caring society is the Troika – aided and abetted by their friends and allies within the Greek establishment.

When we visited in March, people talked about the shock of the last 2 years, and this was palpable – the horrifying, personal and emotional shock to people’s lives of the economic shock doctrine was clear. I know that a critical element of the movement in Greece is organising solidarity with those suffering this impact the most – setting up ‘social’ pharmacies and health centres where people can get free care and medicines they need, growth of cooperatives, distribution of food, having neighbourhood forums where people can come to get practical help and stop isolation. One of our priorities in the GSC now is to see how we can support this – working with trade unions and others here to raise money for projects like these.

But as you get in situations where there is a mass of people fighting back there is a sense of people in animation – new spaces opening up for progressive ideas around what sort of society we want, reflected in culture, art, music. We met Sofia Sakorafa MP – herself leading the campaign for an international enquiry into Greek debt – who told us about the resurgence of a Greek women’s movement – linking up in support of the struggle of cleaners union, led by migrant women workers. And the mass occupation of the main squares, before being smashed up by the riot police, held open meetings every night, involved thousands in designing an alternative constitution for Greece.

But as well as the creativity and emancipation that comes from collective struggle – we are also seeing the rise in fascism. Golden Dawn – not long ago were miniscule, no social base – now thought to have won 10% of the population, who only Saturday night had a 10 000 strong parade through Athens, waving lighted torches and swashtikas, who use the hostility to the Troika to promote right wing nationalism, scapegoat minorities  – organising armed gangs on the streets – first in line of fire migrant workers, but also beating up people in the LGBT community, anyone on the left, homeless people, closing down clubs and theatres. They have strong support in the Greek Orthodox Church – a powerful bastion against social progress – against the LGBT community, against women. Most worryingly they have a large base of support among the police. And Golden Dawn also give out food and help to those struggling – as long as they are Greek, straight, and say they voted for them in the election – which is another reason why this practical help in communities is also part of the battle with the right wing.

The GSC is firmly established in the trade unions in the UK. And I’ve talked about our current discussions with those leading the anti austerity movement in Greece on how we can best support their work to provide practical aid – and we will be coming back to unions who want to show solidarity with Greece to raise money for projects in communities. We also need build up our links with and support for different social forces and community organisations – between the LGBT communities in the UK and Greece, between migrant worker communities, womens organisations and so on. And just as it was in the era of anti apartheid campaigning across the world, art, music and culture are an important part of this solidarity, the spread of ideas and making connections. Which is why exhibitions like this are so essential.

People from around the globe – including western and southern European countries like Greece, Turkey, Ireland have of course had a long history of having to migrate to find work. And because of the economic crisis as far as western European countries go this is now extending. Greek activists living in London have been central to the GSC from the start, and it is immeasurably strengthened as a result. This contribution, insight and links between countries, including members of the LGBT community wherever we are, expressing our own specific experience of the crisis – is essential, and will become increasingly so as we continue with our shared campaign.

This entry was posted in Archive, Speeches. Bookmark the permalink.