Call for Thanasis Kourkoulas, of “Expel Racism” Greece, to be aquitted. 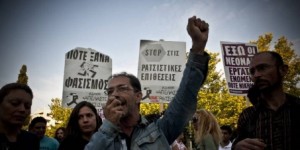 We demand that Thanasis Kourkoulas, member of “Expel Racism” Organization – Greece, be aquitted. The criminalization of antiracist and antifascist action must not be allowed to happen.

On 16th December 2013, Thanasis Kourkoulas, member of “Expel Racism” movement and militant of the antifascist and antiracism movement is to be tried in the 4th Single Judge Misdemeanor Court of Athens, as a result of the provocative and slanderous lawsuit of an extreme rightist who accuses him of “giving orders to a group of  men bearing bats”, a group which he claims attacked him in 2009. This trial is a part of a whole scheme of prosecutions set up by the neonazis in the last few years, which aims at intimidating and targeting people and organizations who are giving a fight openly, collectively and in broad daylight in order to bring down the Golden Dawn gang as well as their collaborators in the state mechanisms. We condemn the unprecedented attempt to criminalize the antifascist action and we demand that Thanasis Kourkoulas be acquitted. Those who belong in prison are the neonazis of Golden Dawn, not the antifascist movement militants. Fascism never again!