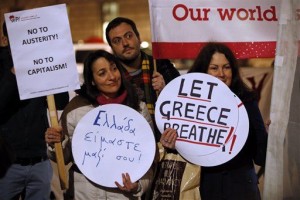 The European Central Bank is trying to force the new anti-austerity Greek government to its knees. Its actions provoked mass demonstrations in Athens last week in support of the government anti-austerity stance.  On Wednesday 11 February the Eurozone Finance Ministers held an Emergency Meeting with Greece where Prime Minister Alexis Tsipras and Finance Minister Yanis Varoufakis presented their plans. On Thursday Tsipras met the other 27 European Leaders at a European Summit in Brussels. He stated ‘Greece will not blackmail or be blackmailed’

The Greece Solidarity Campaign, Syriza London and other organisations are calling for a Mass Rally in support of the people of Greece on Sunday 15th February at 13.00 in front of the National Gallery in Trafalgar Square. This is part of an international wave of rallies and protests in support of Greece taking place across Europe. Come along with friends and colleagues to show your support for the first anti-austerity government in Europe.

We held an Emergency Protest against the ECB and in support of the anti-austerity movement in Greece on Wednesday February 11th at 6.30pm Parliament Square, near Big Ben. Labour MPs Jeremy Corbyn, Katy Clark, Diane Abbot and Chris Williamson and Sinn Fein MP Conor Murphy spoke.