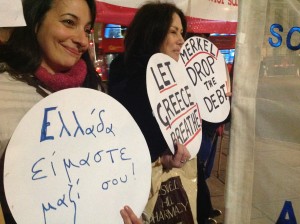 Gather at 6.30pm this Thursday 19th February in Parliament Square, London (by Churchill statue) to show your solidarity with the people of Greece.  Bring your banners and placards demanding: ‘Drop the Debt!’ ‘ Let Greece Breathe!’

After a very successful mass rally of 2000 people in Trafalgar Square  and 30,000 in Athens on Sunday 15th February , along with mass rallies across Europe in support of the people of Greece and against austerity, the Greek Prime Minister Alexis Tsipras and Finance Minister Yannis Varoufakis met with ministers of the Eurozone at a Summit on Monday evening 16th February.  During the previous week’s negotiations the uncrossable red lines of the Greek government were underlined –

On Monday night EU officials gave Greece an ultimatum – to agree by Friday 20th February to continue with the Troika bailout programme or else. Greek Finance Minister Varoufakis expressed outrage at a briefing with reporters late Monday, saying that the other countries appeared to be effectively holding a gun to his head. An agreement would be impossible, he added, because the new Greek government was elected specifically to reject the bailout and its austerity terms. Watch Varoufakis explain what happened,  at a press conference after the breakdown of talks here

Come and Show your Support and Solidarity for the anti-austerity battle of the new Greek government and people.  Stand with the Greek people! 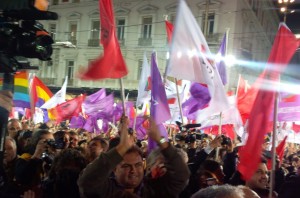