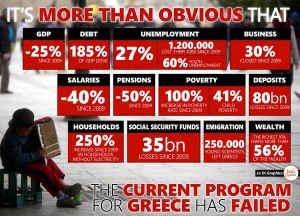 The TUC General Council, representing 6 million trade unionists in Britain, sends greetings and solidarity to the people and trade unions of Greece, through our sister organisations ADEDY and GSEE.

Greek workers and their families and communities have suffered terribly in the five years since the financial crisis began, and in particular since the troika – the European Commission, European Central Bank and the IMF – imposed the infamous Memorandum on the Greek people. Austerity and structural reforms have shrunk the economy by a quarter, produced unemployment of over 25% (over 50% for young people) and seen public services slashed or even closed down as is the case with the public service broadcaster ERB. Minimum wages and pensions have been cut, collective bargaining rights and a voice for workers on the economy have been destroyed, and lives have been ruined: even suicide rates have risen dramatically. The TUC expressed its concern and solidarity with Greek workers and their unions in a resolution at Congress in 2013 and we have since worked closely with the Greece Solidarity Campaign – our support for which we reiterate – and our sister organisations in Greece.

These measures have not been confined to Greece – they are part of a global assault on workers and ordinary people which has led to increasing inequality, falling living standards for the majority and any gains from growth going to the already rich and powerful. Across Europe, workers’ rights are under attack and living standards have fallen or been frozen. Deflation – in part due to lack of wages-driven demand and in some countries excessive personal debt – is now the biggest risk facing the European economies.

The election of the Syriza-led government in Greece in January has therefore given hope not only to the Greek people but to people across Europe. It has already signalled its commitment to meet union demands big and small, such as restoring the value of minimum wages and pensions, pro-poor social policies, reopening the ERB public service broadcaster, re-employing the striking cleaners at the Finance Ministry and ceasing the privatisation of Piraeus port, as well as giving Greek-born children of migrants citizenship rights. Prime Minister Alexis Tsipras has gone on record pledging “to end the medieval regulation of the labour market created by the troika to serve the interests of the oligarchs”, meaning the restoration of collective wage bargaining. The TUC welcomes these moves.

We urge the international community – and especially European institutions and governments – to give Greece room to breathe economically. As ETUC General Secretary Bernadette Segol has said: “Greece’s debt burden is unbearable and must be relieved. European Union policies have created a disaster.” In particular, we call on those governments currently resisting the negotiation of a fair deal on Greek debt to consider the hardship imposed by the Memorandum, and the likely beneficiaries of any further moves to over-ride the democratic will of the Greek people, including the neo-nazis in Golden Dawn who pose a threat to social cohesion and trade unionism.

We urge progressive politicians across the EU to learn the lesson that it is the role of democratically elected governments to protect workers’ fundamental human rights and people’s living standards from market forces rather than the other way around. And we call on trade unionists in the UK and across Europe to show solidarity with the Greek workers and unions in defending the Greek government’s programme of social justice and redistribution, and its programme of genuine structural reform to tackle the power of the oligarchs.  ( Issued by the TUC  25.2.2015)