The solidarity structures – our “oxygen” 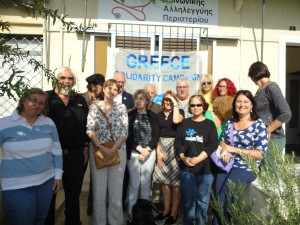 On April 2010, the then “social-democrat” PASOK prime minister, Giorgos Papandreou, announced that Greece had appealed to the European support mechanism.  His act exposed the country to the ordeal of the barbarous memoranda of austerity measures that torment the Greek people until today. This act also alarmed political parties, organizations and every thinking person about what was to follow.

Through the internet many people managed to get informed immediately for the economic terms of the deal, for the IMF and for similar “bailout” processes in other countries. Very soon everybody was in search of how we could stop the storm of austerity measures and of the shrinking of democratic rights.

The discussion started in central squares, like Syntagma square where the general strikes’ rallies were held and the site of the protests of the Greek indignados’ movement, and then it carried on in the local squares in the neighborhoods. Such meetings of the people quickly awakened their collective consciousness, which kicked off the appearance of the first solidarity structures and networks. Soon solidarity clinics, pharmacies, food solidarity structures, self-managed cooperatives, time-banks, solidarity tutoring etc. were created around the country.

Following this route, I found myself along other fellow citizens in the Social Solidarity Clinic of Peristeri. As unemployment soared to extreme heights and public welfare services were collapsing, the creation of such solidarity structures became our “oxygen”. They were our life-stake that we had to win.

The volunteers of the solidarity clinic are 90% women – doctors and nurses with  medically unskilled who do the admin work. This solidarity structure developed roots in the local community despite the fact that none of the institutions (local or state authorities) helped us out. The solidarity clinic grew up on the hands of the women that volunteered in spite of the personal difficulties they were facing themselves. Without having heard or discussed self-management and self-organisation ever before, they were doing it through processes of direct-democracy.

As the darkness spread over a country that sunk in a death spiral of thousand suicides, people were forced to the speed of running towards light. Solidarity was the light that warmed up people’s hearts and fed our minds in order to stand up fighting in those black years of the memoranda.

Day by day we gathered experience, the solidarity structures got organized, they coordinated with Solidarity for All, and their know-how as well as their solidarity activities, created the terrain for effective militant interventions in hospitals, ministries and elsewhere. This is because, as the chart of principles of our solidarity clinic states clearly, our role is not to substitute for the state, nor do we free the state for its obligations towards all the citizens and population of this country, without any discrimination and exception.

Every successful attempt ‘was giving birth’ to many new ones and at the same time was charging our belief and trust in that “we can stand up and we can resist collectively and in solidarity”.  Our slogan always has been “we will let no-one be alone against the crisis”.  This unlocked many minds, and changed established habits and mindsets and ourselves too.

Our solidarity clinic was transformed day by day; shelves filled the walls and those were filled with medicine, the rooms with equipment according to our capabilities and limited available space. The radius of doctors and other volunteers was widening.

However as the humanitarian crisis grew and deepened in Greece so did the basic needs that an enlarging part of the population could not afford anymore. So our next step was to create a new working group within the solidarity clinic, the food solidarity group, aiming to support people in our community to meet their food needs.

With our slogan “we won’t let any table be empty or any children without food” and by practicing self-organisation, we collect food-stuff outside the super-markets, which then we share to those in need. We had an increase of 400% in food needs in a period of two months, before our activity became widely known in our borough, which shows us that the real dimension of food-needs is still unknown.

Thankfully in the meanwhile the people, enraged and disgusted as they were from the previous governments, brought the left to the fore by voting for a new coalition government led by SYRIZA. This development brought back hope in the saddened eyes of our people which shone again, and opened up a new round of debate among the solidarity structures in regard with their functioning within the new situation.

What we expect from the current government is to materialize its program that pledges to eradicate the pain from the lives of, especially the most vulnerable sectors of the population, to redress injustices, to counter immediately the humanitarian crisis and to restore democracy in our country.

I believe that it will succeed by abandoning wrong policies that weakened the social fabric, which then was destroyed by a series of former governments submitted to the interest of bankers and capitalists.

Solidarity was the light that warmed up people’s hearts and fed our minds in order that we could stand up fighting.

Today, happier than before, we embark on a discussion about creating a social-solidarity currency in Peristeri, our city. The path for self-sustainability, self-determination and independence should be opened too, now. We move on and I reckon that we will manage it.

For more on the Solidarity for All resistance, see www.solidarity4all.gr and GSC website here  Read the Guardian report on Peristeri clinic and the Solidarity Movement 23.1.2015