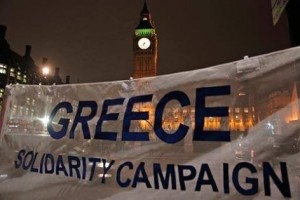 The Greece Solidarity Campaign helped facilitate a packed parliamentary briefing meeting on 7th March 2015 in the Committee Rooms of the House of Commons.  The meeting was chaired by Jon Cruddas MP. The main speaker was Euclid Tsakalotos, the Alternate Minister of International Economic Relations in the Greek Cabinet and the other speakers were Ann Pettifor, economist and expert on sovereign debt, Director Policy Research in Macroeconomics (PRIME) and Paul Mason, Economics editor, Channel 4 News. 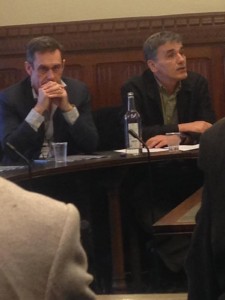 Among the 40-50 people attending were 8 MPs – 6 Labour, 1 Sinn Fein, and 1 Conservative, a Sinn Fein Senator, 2 Labour peers, and staff for a number of other MPs, plus parliamentary organisers for the Trade Union Group of MPs and Sinn Fein. Also present were the Greek Ambassador and the Press Officer for the Greek Embassy, a further three Greek journalists, a number of leading economists, representatives of the Jubilee Debt Campaign and Steve Turner (Assistant General Secretary of Unite the Union).

The GSC presented a written briefing. You can download and read the briefing here. Greek-solidarity-campaign-2015-03-07-4

It calls for MPs to join a parliamentary Greece Solidarity Network which Jon Cruddas MP has agreed to convene after the General Election. The GSC will support the network and the call for a European Debt Conference.