Sign: Open letter of solidarity with the anti-austerity movement in Greece 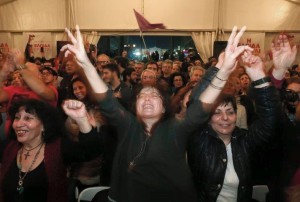 A new government has formed in Greece that places people at the heart of its programme of change.

The crippling bail-out package imposed through the EU/IMF Memorandum has created huge increases in unemployment – especially for the young. There is a consequent loss of health insurance and therefore access to health services for nearly 1 in 5 Greeks, as well as severe homelessness and energy disconnections. This has created what the Lancet has reported as a public health tragedy. Wages and pensions have been drastically cut while living costs have soared. There has been an erosion of basic rights such as collective bargaining. As well as damaging society these policies have failed to reboot the Greek economy and the public debt in relation to GDP is now far greater than it was before the programme started in 2010.

Greek people have chosen a new path. They have chosen a government committed to ending the austerity programme. They have voted for immediate debt renegotiation. Repudiation of some and repayment of the rest linked to economic growth, to give creditors a stake in growing the economy. German post war debt was managed like this in 1953. The Greeks have voted in a new sort of government that has placed addressing the humanitarian crisis at the top of its priorities. The government are taking immediate steps to support those suffering the most under the austerity programme.

The Greek election results have implications for the UK and the whole of Europe. Austerity policies have been a choice by those in power, and they have failed. Greece reminds us that different economics and politics are possible.

Undoubtedly there will be pressure on the new Syriza Government from the EU, the banks and their friends not to deliver their promises.

We applaud the courage of the people of Greece in choosing hope and a new direction in policy that can start to rebuild a sustainable Greek economy and faith in politics. It is in all of our interests to defend them. Solidarity with Greece at this time is an imperative.

Open letter to the anti-austerity movement in Greece

This entry was posted in Archive, News, Updates. Bookmark the permalink.

One Response to Sign: Open letter of solidarity with the anti-austerity movement in Greece